Article from: Newsletter No. 93
Written by: Tiffany S. Slater
PDF: No article PDF

Bullhead sharks (Heterodontiformes) represent a monophyletic group that occupies a basal position within modern sharks, rays, and skates (Neoselachii) (Carvalho 1996).  Remains of Heterodontiformes are among the oldest in the fossil record for Neoselachii (Kriwet 2008).  Three genera are known from the Jurassic as a result of their rapid diversification: Proheterodontus and Paracestracion, which disappear from the fossil record before the Cretaceous, and the extant Heterodontus, which underwent further radiation in the Cretaceous.

A newly discovered complete heterodontid specimen from the Kimmeridgian of Eichstätt, Germany, hereafter referred to as P. danieli sp. nov., was the subject of an analysis of meristic characters in order to inform on the past biodiversity of this group.  This sub-adult specimen was compared to the holotype of Paracestracion falcifer (AS-VI-505) and to extant heterodontid species. 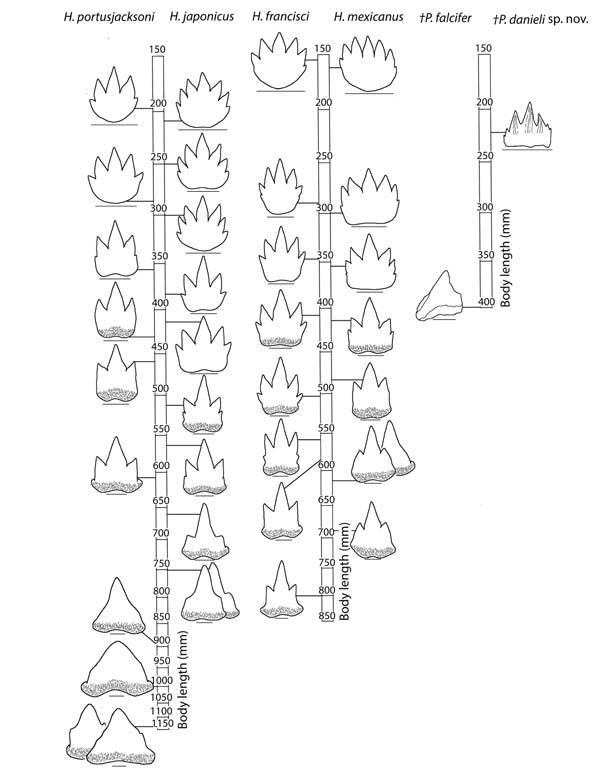 Figure 1. Tooth morphology of symphysial teeth throughout ontogeny for †extinct and extant heterodontids. Adapted from Reif 1976. All scale bars 1 mm.

The genus Paracestracion possesses one dorsal fin spine anterior to each of the two dorsal fins, the first associated with the pelvic fins.  Spines are supported by basal cartilages, which also support fin radials (Maisey 1979).  Positioning of the median and paired fins is under genetic control, and the close association of fin spines with the dorsal and pelvic fins suggests they are also involved in dorsal fin modularity (Mabee et al. 2002).

Despite this conservation in the position of pectoral fins, the position of the coracoid and puboischiadic bar differs between the new specimen, other Paracestracion species, and extant Heterodontus (Table 1) (Mabee 2002).

Seven distance measurements were taken from P. danieli sp. nov., the holotype of Paracestracion falcifer, extant juveniles of H. japonicus, H. zebra, H. philippi, and two adult H. japonicus to identify differences in body shape throughout ontogeny and between species.  The Past3 software package was used to convert measurements into a ratio of length and to perform a Principal Components Analysis (PCA).

A comparison of meristic characters suggests that P. danieli sp. nov. is a separate species to that of P. falcifer and thus that extinct heterodontids were more diverse than previously thought.  Future research will use cladistics approaches to investigate inter-relationships of Heterodontiformes.

I am grateful for the Palaeontological Association Undergraduate Research Bursary PA-UB201606 that financially supported this project.  I would like to thank my supervisors, K. Ashbrook and J. Kriwet for their support and expertise, and P. Bartsch and J. Klapp at the Museum für Naturkunde Berlin for access and assistance with their collection.

MAISEY, J.G.  2012.  What is an ‘elasmobranch’? The impact of palaeontology in understanding elasmobranch phylogeny and evolution.  Journal of Fish Biology, 80, 918–951.

Tiffany S. Slater - Institute of Science and the Environment, University of Worcester