The Palaeontological Association
Views from the Moncayo Natural Park (Iberian Chains, Spain), which contains Cambrian outcrops with spectacular invertebrate fossils. We are planning to visit this area the second day of the field-trip..

Spain contains some of the most extensive and fossiliferous Palaeozoic outcrops in Europe, including invertebrate and vertebrate faunas that are internationally significant in terms of systematics, palaeoecology and palaeobiogeography. The fieldtrip will take place in one of the most famous areas with Palaeozoic rocks and abundant fossils from Spain, the Iberian Chains, located in the NE part of the Iberian Peninsula. During the three days we will be moving between the cities of Teruel and Zaragoza (Province of Aragón). The aim of the fieldtrip will be to review fossil invertebrate and vertebrate communities from the Cambrian through to the Devonian, and how they change according to intrinsic and extrinsic factors.

The Palaeontological Association
Proposed itinerary for the field-trip.

During the first day of the fieldtrip we will visit important new and classic localities preserving invertebrate communities from the Ordovician and Silurian. The Upper Ordovician faunas from the Fombuena and Cystoid Limestone formations are abundant and associated with a dramatic change in global climate (the so-called Boda Event). These strata record the immigration of marine invertebrates against the backdrop of global warming. This will be followed with a visit to the Silurian, represented by a low-diversity fauna of crinoids, brachiopods, trilobites and molluscs.

The second day will start with a visit to the important Cambrian locality Purujosa, one of the most interesting Cambrian sections in NE Spain. Large-scale excavations over the past 10 years have allowed us to assemble an extensive collection of invertebrates from the classic middle Cambrian Mansilla and Murero formations. This material is remarkable and includes some of most spectacular Cambrian echinoderms described in the last years and abundant trilobite faunas. During the evening we plan to do a short stop in the classic Murero locality were De Verneuil discovered the “primordial fauna” in 1862. Two brief stops will allow us to visit levels with exceptional preservation including echinoderms, trilobites, sponges, paleoescolecids and recently described radiodontans.

The third day will cover the important Devonian localities, mainly focused on the Nogueras and Mariposas Formations (Lochkovian to lower Emsian), representing shallow- water marine environments with an abundant invertebrate and vertebrate fossil record. We will start by visiting the classical locality of the Las Viñas section, close to the Santa Cruz de Nogueras village, showing the rich invertebrate fauna (brachiopods, echinoderms and trilobites) through the whole Norgueras Fm and the transition to the Mariposas Fm. After having lunch in the villages of Loscos, we will visit the Santo Domingo locality, again within the Nogueras Fm, with abundant corals, brachiopods, bryozoans and conodonts, highlighting the presence of interesting remains of vertebrates and plants, visiting the type locality of Teruelia diezii, an early polysporangiophyte and where a semiarticulated specimen of Leonodus carlsi (the earliest tooth-bearing shark) was found. Before heading back to Valencia, we will stop in the village of Santa Cruz de Nogueras to visit the local ‘Museum of the Palaeozoic Seas’ where interesting fossil examples of the region are exposed.

During the visit we have booked a hotel called Posada del Almudi located in Daroca, capital of the Jiloca valley and a former frontier town. Daroca offers a varied artistic and architectural heritage of undoubted interest; it is a mixture of Muslim and Christian styles. Considering the short days in December, tourist visits to the village and possibly local wineries are planned during our stay in Daroca, allowing participants to share the impressions and discussions developed during the day in a warmer environment. Remember that all meals, transport and accommodation in different hotels are included in the price. In order to facilitate an early departure the next day to begin the fieldtrip, the fees include a hotel for the night of Saturday 14th December. Once the registration is closed, the organizing committee will contact those delegates participating in the fieldtrip for further details and hotel information. It is important to note that the accommodation of Tuesday 17th December is not included in the fieldtrip registration, so it is your own responsibility to book your accommodation from Tuesday night onwards. On our arrival to Valencia on the 17th we will facilitate the transport to your hotel bookings. We expect to arrive to Valencia during the evening (20:00). 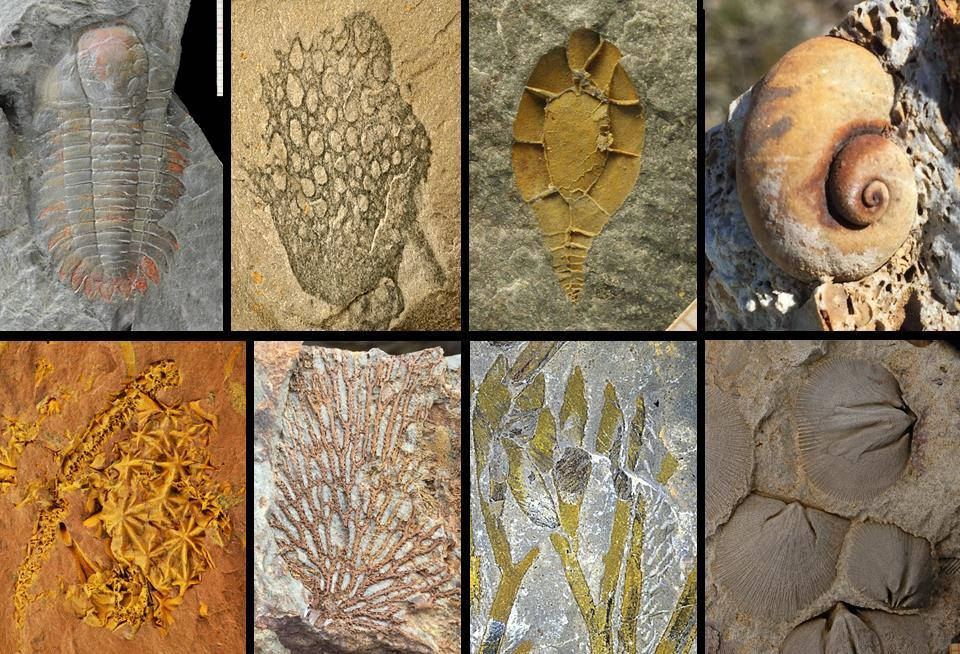 The Palaeontological Association
A selection of Palaeozoic echinoderms from outcrops that will be visited during the field trip.

The post-conference fieldtrip will entail a one-day visit (21st December) to the Miocene of the province of Alicante and will be limited to 45 participants (coach capacity). We will depart at 08:00 from the Philology Faculty (where the conference will take place) arriving at Alicante around mid-morning. During the day we will be visiting several Miocene outcrops. Our first stop will focus on the ichnological record of the Cabo Huertas, assigned to a Tortonian and Tyrrhenian age, where both open platform and coastal deposits have been described.

The Palaeontological Association
Location of the study section. Geological map modified from Pina and Cano, 2004.

The second stop will comprise a visit to the important atoll-type Miocene reef developed during the Messinian close to the outer margin of the continental shelf, about 20 km northeast of the Messinian palaeocoast. The current relief shows the original morphology of the atoll, providing excellent outcrops where the three-dimensional geometry of the different parts of the coral reef can be recognized. It was precisely during the formation of this coral reef structure that the Mediterranean Sea was subjected to dramatic changes related to the Messinian Salinity Crisis. Therefore, Santa Pola not only records the Messinian atoll coral reef but also evidences the profound transformation that the Mediterranean basin underwent during this period.

Finally, we will visit the Palaeontological Museum of Elche (MUPE), the only palaeontological museum of the Alicante Province. The MUPE was inaugurated in 2004 with the objective of encouraging interest in palaeontology and highlighting the palaeontological heritage of the province. The extensive collections of the museum include fossils, minerals and recent shells, with exhibits focusing on those from the province. After visiting the museum we will have lunch in the same locality at Elche (included in the fees). Due the proximity of the village to Alicante Airport, which has abundant direct connections to the UK and other parts of Europe, under demand, we will stop at the airport at 17:00/17:30, in case some of the participants would like to arrange their flights back from Alicante. However, please check the flight times carefully in order to have enough time for checking and passport controls. We are expecting to arrive back in Valencia around 19.30.