Monograph: Shell structure of the Craniacea and other calcareous inarticulate Brachiopoda 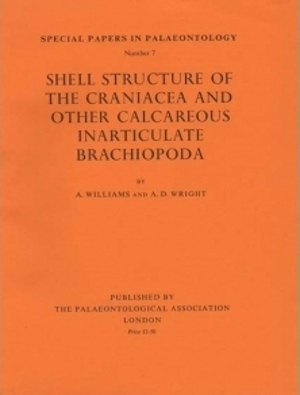 WILLIAMS, A. and WRIGHT, A. D. 1970. Shell structure of the Craniacea and other calcareous inarticulate Brachiopoda. Special Papers in Palaeontology, 7, 1–51.

The brachial valve of living Crania is triple-layered with an outer periostracum consisting of a mucopolysaccharide layer bounded by protein membranes and protected by an impersistent, external film of mucopolysaccharide, a primary calcareous layer made up mainly of acicular crystallites and a secondary calcareous layer composed of laminae of calcite ensheathed in protein sheets. In the pedicle valve, the secondary layer is not developed and the external mucopolysaccharide film acts as an adhesive by which the valve is attached to the substrate. The myotest in both valves is differentiated as a series of calcitic blades disposed more or less normal to the internal surface. Branched caeca permeate both valves and act as storage centres for polysaccharides and proteins but are not connected to the periostracum by a brush as in the articulate brachiopods. Studies of fossil craniaceans have shown that the structure of the pedicle valve, unlike that of the brachial valve, has changed repeatedly during the evolution of the group. Such variation includes a fully developed succession in the unattached Pseudocrania which is identical with that of the brachial valve, the loss of punctation in Petrocrania, the secretion of coarse crystallites instead of laminae in the thick secondary shell of certain Mesozoic craniaceans like Ancistrocrania and Zsocrania, and the lack or negligible deposition of calcareous shell in some early stocks like Philhedra and Acanthocrania. A laminar secondary layer is also characteristic of two other groups of calcareous-shelled inarticulates, the Craniopsidae and Obolellida, but is not regarded as indicating any close relationship between them and the Craniacea.