Monograph: The Interrelationships and Evolution of Basal Theropod Dinosaurs 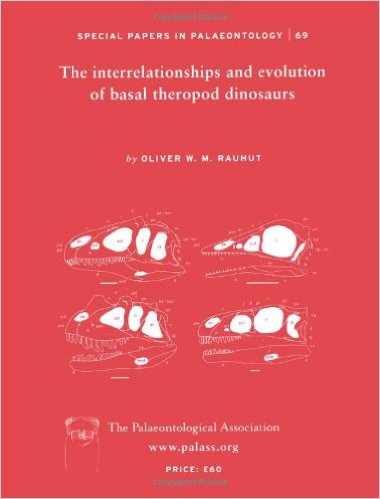 Many recent studies of theropod relationships have been focused on the phylogeny of coelurosaurs and the question of the origin of birds, but the interrelationships and evolution of basal theropods are still poorly understood. Thus, this paper presents a phylogenetic analysis of all theropods, but focuses on the basal members of this clade. The result supports the inclusion of Eoraptor and herrerasaurids in the Theropoda, but differs from other recent studies in two main aspects: (1) The taxa usually grouped as ceratosaurs form two monophyletic clades that represent successively closer outgroups to tetanurans. The more basal of these clades, the Coelophysoidea, comprise the majority of Late Triassic and Early Jurassic theropods. The other clade of basal theropods that are usually included in the Ceratosauria comprises Ceratosaurus, Elaphrosaurus, and abelisaurids. (2) Two monophyletic groups of basal tetanurans are recognized: the Spinosauroidea and the Allosauroidea. In contrast to other recent phylogenetic hypotheses, both clades are united in a monophyletic Camosauria. The branching pattern of the present cladogram is in general accordance with the stratigraphic occurrence of theropod taxa. Despite the differences in recent analyses, there is a significant level of consensus in theropod phylogeny. At least four different radiations of non-avian theropods can be recognized. These radiations show different patterns in Laurasia and Gondwana, and there are increasing differences between the theropod faunas of the two hemispheres from the Triassic to the Cretaceous.