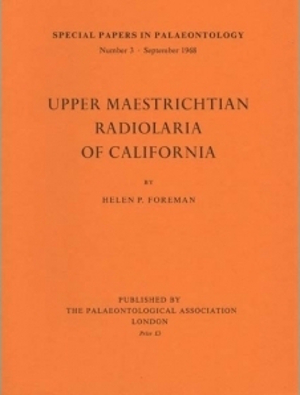 Seventy-seven species of Radiolaria (fifty-six of them new) have been described from four localities of the Moreno formation in Fresno County, California. Samples from one of these localities, a core, extend into probable Paleocene. In addition to the samples used for descriptions of species, other Maestrichtian to lower Santonian samples from California, the Caribbean, and the South Atlantic have been examined to determine time-ranges. Of the described species, only five extend beyond a short transitional zone up into probable Paleocene. Four have been recognized in the oldest sample studied from the lower Santonian of Trinidad. Eight new genera, Acidnomelos, Calyptocoryphe, Cornutovum, Ectonocorys, Eribotrys, Gongylothorax, Myllocercion, and Solenotryma, are described. Special attention has been given to describing and illustrating details of cephalic structure as it is believed these are important in establishing relationships and understanding evolutionary changes which will increase the usefulness of this group for stratigraphic correlation.