Monograph: Evolution of the shell structure of articulate brachiopods 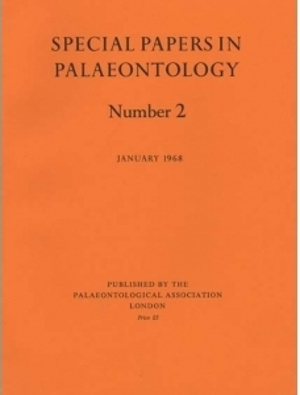 WILLIAMS, A. 1967. Evolution of the shell structure of articulate brachiopods. Special Papers in Palaeontology, 2, 1–55.

Electron microscopic studies of the shell fabric of articulate brachiopods show that the triple division of the shell into periostracum, and primary and secondary calcareous layers, is characteristic of most members of the subphylum. The relationship between these layers and the outer epithelium of the mantle controlling their secretion can be studied in living Rhynchonellida and Terebratulida. Each fibre of the secondary layer is coated with protein and secreted by an outer epithelial cell which is moulded to the characteristic shape and stacking of the fibre. The morphology of the exposed parts of fibres can, therefore, be used to identify modifications of the epithelium, like those arising from the spread of muscle bases, and to determine the nature of the outer epithelium in extinct groups. The attitudes of fibres can also be used as vectors to study the growth dynamics of the shell and its internal skeletal features.

The triple-layered shell with orthodoxly stacked fibres was the basic skeletal type of ancestral Rhynchonellida and Terebratulida, and of the Spiriferida, Pentamerida, and Orthida. Modifications include the development of a tertiary calcareous layer in the Koninckinacea (through inhibition of the secretion of protein sheets and the coalescence of fibres across intercellular boundaries to form a coarsely prismatic shell) and the suppression of the secondary calcareous layer in the Thecideidina. The most profound changes affected the Strophomenida. Among the Plectambonitacea, the secondary calcareous layer was made up of orthodoxly stacked fibres, but the primary calcareous layer consisted of lath-like laminae, which were the sole constituents of the shell of all other Strophomenida (including the Triplesiidina). Regular banding of the strophomenide shell, resulting from laminar deposition, with a periodicity of about 0.3, is comparable with that sporadically found in the primary and secondary calcareous layers of living articulates, and is believed to register diurnal variation in secretion.