Monograph: Palaeogene foraminiferida and palaeoecology, Hampshire and Paris basins and the English Channel 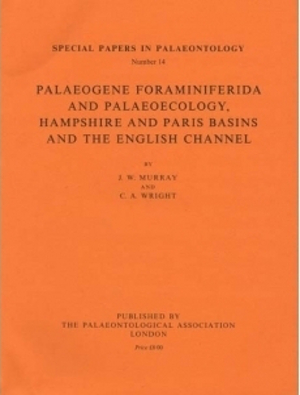 The classic exposures of the Hampshire and Paris Basins have been measured and sampled systematically. For each locality data are provided on the lithological succession, the range of foraminiferid species and their abundance, and general features of the assemblages (diversity index, ratios of the suborders Textulariina, Miliolina, Rotaliina, and percentage dominance). Similar assemblages have been grouped into faunules and a palaeoecological interpretation of these has been made by careful comparison of the data with those for recent foraminiferids. It is concluded that the Palaeogene sediments of the Hampshire Basin were deposited by one or more rivers flowing from the north-west. The environments recognized are marginal marine and, apart from continental and freshwater situations, include nearshore shelf, deltaic marine, lagoonal, fluviomarine, and marsh. By contrast the Paris Basin was a region of enclosed shallow shelf, lagoonal and littoral environments of normal or hypersalinity. During the Lutetian subtropical assemblages of southern origin were established in the Paris Basin and in the Channel and its Western Approaches. Correlation within the Hampshire Basin and with the Paris Basin and submarine occurrences is discussed in the light of the environmental control of individual species. No new species have been named. Many of the common species are illustrated in twenty plates of scanning electron photomicrographs.