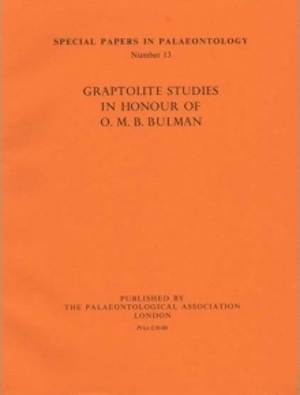 Apiograptus Cooper and McLaurin, gen. nov., with Glossograptus? crudus Hams and Thomas, 1935 as its type species, is a scandent biserial graptolite in the Yapeenian (upper Arenigian) of Australasia, and has early developmental stages which parallel those of Pseudisograptus manubriatus (T. S. Hall, 1914). The general aspect of its proximal region consequently resembles that of dichograptids whereas its distal region, in profile, resembles that of glossograptids. Details of development, inferred from growth stages, sparse structural evidence, and by analogy with P. manubriatus, suggest that the rhabdosome could be readily derived from that of P. manubriafus by a continuation of the tendency for the dorsal stipe margins to develop a loop at their points of flexure and to approach scandency. Such derivation is consistent with the stratigraphic relation and similarity of thecal form of the two species and is thought to reflect their phylogeny. The relationship of Apiograptus crudus to the glossograptids is uncertain and its postulated significance as indicating the origin of that group remains open. Closest affinities of the new genus lie with the dichograptids and it is thus included within the Family Dichograptidae.

Pseudisograptus manubriatus is discussed and some new material illustrated; four informal members are recognized, designated as forms A, B, C, and D. Growth stages of form C resemble those of Apiograptus crudus more closely than equivalent stages of the other forms.