Monograph: Stromatolites and the biostratigraphy of the Australian Precambrian and Cambrian 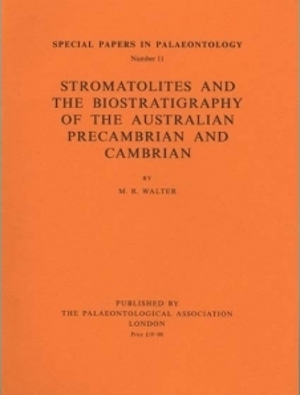 WALTER, M. R. 1972. Stromatolites and the biostratigraphy of the Australian Precambrian and Cambrian. Special Papers in Palaeontology, 11, 1–190.

The modem Russian methods of stromatolite classification and zonation of the Precambrian are tested in Australia on stromatolites from the Amadeus, Hamersley, Bangemall, McArthur, and Georgina Basins and the Antrim Plateau Volcanics, and from the Ventersdorp 'System' of South Africa, and are found to be generally applicable. Only columnar stromatolites are used and they are classified using their column shape, orientation and branching, lamina shape and, infrequently, microstructure. Taxa intergrade, but each has a distinct mode in its range of variation and the taxa boundaries are defined between these modes.

New correlations which are more precise than previously possible are made between the Amadeus Basin and Adelaide Geosyncline. The upper Bitter Springs Formation of the Amadeus Basin is intermediate in age between the Umberatana Group and the Skillogalee Dolomite of the Burra Group, Adelaide Geosyncline. Both the upper Bitter Springs Formation and the Umberatana Group contain rich stromatolite assemblages indicating correlation with the Upper Riphean (950±50-680±20 m.y.). The Skillogalee Dolomite contains a Middle Riphean (1350±50-950±50 m.y.) assemblage. Middle Riphean stromatolites also occur in the McArthur Basin and in the Bangemall Group of the Bangemall Basin. A Cambrian stromatolite from the Amadeus Basin is distinct from all Precambrian stromatolites, except some from the very latest Precambrian, but is similar to other Cambrian stromatolites in possessing a very distinctive vermiform microstructure which first appears in stromatolites just prior to the beginning of the Cambrian. A probably Early Cambrian stromatolite from the Georgina Basin is a new kind closely related to Jacutophyton. Two forms of Conophyton are identified from the latest Precambrian or Early Cambrian Antrim Plateau Volcanics. The correlations suggested are all consistent with known stratigraphic, palaeontological and radiometric data, except some new radiometric data from the Adelaide Geosyncline which have yet to be confirmed. The zoning scheme is extended to the early Proterozoic and three distinctive stromatolites are identified from the Mount Bruce Supergroup (approximately 2000 m.y. old). These are different from younger stromatolites but one also occurs in the early Proterozoic Ventersdorp 'System' of South Africa. However, a fourth stromatolite from the Mount Bruce Supergroup is indistinguishable from a Riphean form.