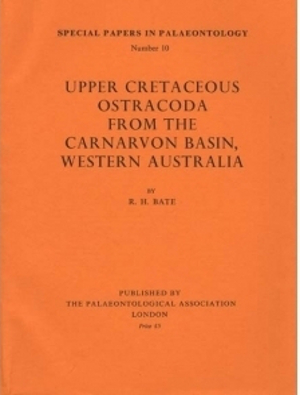 Coniacian, Santonian, and Campanian ostracod faunas, comprising some 54 species, are described from the Carnarvon Basin, Western Australia. Of these, 9 genera and 32 species are new; 2 genera and 22 species, also new, are left under open nomenclature.

The ostracod fauna is identified as a Southern Hemisphere fauna, of which 11 genera are unknown in the north. A twelfth genus, Oculocytheropteron nov., is not yet confirmed as being entirely a southern form. 1 cosmopolitan genus, Cytherella Jones, is represented by 3 atypical species.

The stratigraphical value of the ostracods is shown and the lateral equivalence of the upper part of the Toolonga Calcilutite with the Korojon Calcarenite confirmed. A new hinge type, characteristic of the Cytheruridae, is identified and named peratodont. 4 variations (holoperatodont, hemiperatodont, paraperatodont, and artioperatodont) are recognized.