Article: Early postembryonic to mature ontogeny of the oryctocephalid trilobite Duodingia duodingensis from the lower Cambrian (Series 2) of southern China 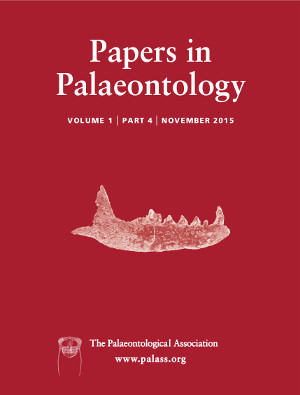 Many well-preserved, articulated exoskeletons recovered from the early Cambrian (Stage 3) Mingxinsi Formation in Weng'an, Guizhou Province, southern China, permit reconstruction of the early postembryonic to mature (i.e. protaspid to holaspid) ontogeny of the small oryctocephalid trilobite Duodingia duodingensis Chow. It is likely that the type material is a latest stage meraspis, and the species had nine thoracic segments in the holaspid phase rather than the eight suggested previously. The earliest holaspis is relatively small in size (about 3.00 mm in total length), and the succeeding instars show little size-related shape change. Striking changes take place in the morphology of the glabella during early ontogeny including forward extension of the axial furrows until they reach the anterior cephalic margin in meraspid degree 0iii, and narrowing of the glabellar mid-region. This is the first noneodiscid trilobite to show three developmental stages within meraspid degree 0. Documentation of ontogenetic changes demonstrates that both Duodingia hubeiensis and D. taihuensis are junior synonyms of D. duodingensis because they bear characters of particular ontogenetic stages of their senior synonym. The per-moult growth increment in D. duodingensis was apparently small in this small trilobite. The development of trunk segmentation during the meraspid phase is apparently more complex than in many other trilobites and could include multiple moults within individual meraspid degrees, intraspecific polymorphism in the pattern of segment release, or phenotypic variation among the population in the degree of segment expression. Fluctuations between accumulative moults, in which segments are added to the meraspid pygidium, and depletive moults, in which segments are released into the thorax, if confirmed, would suggest tight coordination between these different aspects of trunk segment development.