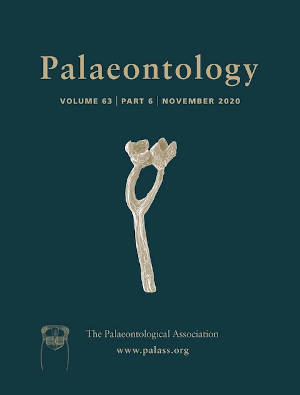 Abundant, well‐preserved specimens of spheroidal organic‐walled microfossil Yurtusia uniformis are reported from the basal Cambrian Yanjiahe Formation in the Changyang area of Hubei Province, South China. Thin and hollow processes extend between the double walls of the vesicle. The single to multiple internal bodies within the vesicle cavity are observed in the genus for the first time, representing reproductive structures (dividing daughter cells). A small circular perforation may occur on the vesicle wall to release the internal bodies. Morphological analyses of specimens preserved at various life stages reveal that processes gradually became longer as the vesicle grew in size. The internal bodies (daughter cells) underwent several successive divisions within the vesicle, which was accompanied by the simultaneous growth of both vesicle and processes. The regular growth of cells, formation and release of daughter cells, and the remarkable morphological similarity between extant algae and the studied microfossils suggest that Yurtusia uniformis is probably a green microalga that may be closely related to the Trebouxiophyceae or even Chlorellales (Chlorophyta). The growth and reproductive mode of individuals indicates that Y. uniformis is an actively growing vegetative cell of microalgae, rather than a metabolically inert cyst or resting spore. A life cycle involving vegetative growth and asexual reproduction is proposed for Y. uniformis on the basis of the life histories of modern chlorophytes. The multiple internal cells may represent autospores produced by a mature autosporangium during asexual reproduction, which subsequently developed into separate young vegetative cells after their release from the opened autosporangium.