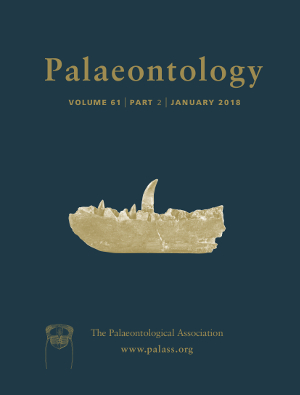 Here we explore the spatial, temporal and phylogenetic patterns of ecological diversification for the entire clade of thelodonts, one of the earliest groups of vertebrates and longest lasting of the Palaeozoic agnathans in the fossil record. Parsimony and maximum‐likelihood methods are used to reconstruct ancestral states of their geographical distributions, habitats and lifestyles. Our results support the concept that thelodonts originated during the Middle?–Late Ordovician probably in marine open waters of Laurasia, with a demersal lifestyle on hard substrates being the ancestral condition for the whole clade. Later, thelodonts underwent a complex ecological diversification and palaeobiogeographical history, comparable in many aspects to those of some major groups of living fishes. Different modes of life evolved repeatedly and a wide range of habitats were colonized by distinct groups, including deep waters and brackish marine and/or freshwater environments. Diadromous strategies presumably appeared on nine different occasions. The palaeobiogeographical history of thelodonts reveals significant differences in the dispersal potential of some major groups. Dispersal of thelodontiforms entailed displacements over long distances and the crossing of deep‐water biogeographical barriers, whereas those of furcacaudiforms were always limited to areas interconnected by shallow platforms. We propose that the evolution of pelagic larval stages in thelodontiforms might explain this biogeographical pattern and could satisfactorily account for the greater evolutionary success of this group.