Article from: Newsletter No. 89
Written by: Jo Hellawell and Jenny McElwain
PDF: No article PDF 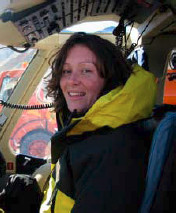 Jenny McElwain is a palaeobotanist at University College Dublin (UCD) in Ireland. She is an Associate Professor of UCD’s School of Biology and Environmental Science, member of UCD’s Earth Institute, and Director of the Programme for Experimental Atmospheres and Climate (PEAC) facility. Over the past 20 years her research and teaching have focused on the development and use of palaeobiological proxies to understand the evolution of Earth’s atmosphere and climate on multimillion year timescales, and how fluctuations in both have influenced large scale patterns in plant evolution. She has published over 75 papers including research articles, book chapters and two editions of an undergraduate textbook ‘The Evolution of Plants’. Before joining UCD in 2006 she was an associate curator of fossil plants at the Field Museum of Natural History in Chicago, USA (2000–2006) and a post-doctoral researcher at the University of Sheffield, UK (2003–2006). She graduated from Trinity College Dublin (TCD), Ireland, with a BA in Botany in 1993 and from Royal Holloway, University of London, UK, with a PhD in 1997.

In the first year in my undergraduate degree at TCD following a course in quaternary palynology and geomorphology of the Irish landscape. I was also very much influenced by my first exposure to fossil plants in a lab by Geoff Clayton at Trinity.

When did you decide to follow the career path you are on now?

During my undergraduate dissertation project which was on stomatal density changes throughout Holocene sediments in the West of Ireland. I started the project as a ‘stomatal density proxy sceptic’ and was surprised to find myself a convert to stomata and research in general by the end of it.

What are you most proud of in your career to date?

That I have survived despite many ups and downs. I am also immensely proud of all my former students and post-docs who have gone on to achieve independent research careers all over the world.

What is your favourite fossil and why?

That is very difficult. I think it has to be Ginkgo minuta from the late Triassic of Greenland. Why was it so small?!

In an average week, how many hours do you work?

I try to have a good work-family/life balance so I usually work 45 to 50 hours a week and never at weekends unless I have a big deadline.

How many people do you work with on a daily basis?

There are currently about 12 people in my lab and we are grouped together in connected office and lab space so I interact with at least five or six people every day for research and usually many more. When I am teaching I could be interacting with a class of 350 or 25. When I’m writing I try to avoid everyone and hide at home to concentrate.

What gives you the most satisfaction in your job?

Science, continuous discovery, new ideas, exposure to different minds and ideas, teaching. I love my job, basically, and the only thing I’m not particularly keen on is the admin.

What are the worst things about your job?

Rejection of research grants, tough peer reviews, rejection of new ideas expressed in manuscripts. As an academic we are constantly under peer review no matter what stage of career we’re at. It does not get any easier but you do learn not to take it so personally.

Do you get to do much overseas travel for work and do you do much fieldwork?

I have had great opportunities in my career to travel for fieldwork and work purposes. I have travelled to almost every continent to collect modern or fossil plants or to speak at conferences or departmental seminar series. My lab are currently in Fiji collecting tropical plants for a big modern trait-based study to help interpret fossil plant physiology and function. Follow the blog of the field work at .

Has there been a paper or book that has influenced your career?

The Shell Guide to Reading the Irish Landscape by Frank Mitchell had a huge influence on me as an undergraduate student. I had no idea that vegetation could be tracked in the past or reconstructed using the pollen and spore record until I read this book. I started to look at the whole landscape differently once I realised the processes that had shaped different features. I think this is where I got the bug for palaeo.

Who have been the most important mentors in your career so far?

My undergraduate supervisors Fraser Mitchell (not related to Frank Mitchell!) and Mike Jones, and my PhD supervisor Bill Chaloner. Bill was particularly wonderful because he was so generous with his time and patience. His door was always open and he kept up a subtle but encouraging pressure throughout my PhD which kept me on track and prevented me from going off on tangents. Ian Woodward at Sheffield was also a wonderful post-doc mentor – he was always full of humour and incredibly enthusiastic about science and discovery.

What has been the best career advice you have received?

The best career advice I have ever been given was by Ian Woodward who said that you need staying power to succeed in academia. In other words you need to be able to accept or deal with the set-backs and try again. Mostly this means re-submitting a paper or grant if they get rejected.

The biggest issue is that there are far more brilliant and capable people than there are jobs available. The competition to get a permanent job is therefore getting harder and harder. My advice is to start early to think about developing a research programme. Think about the key question that will drive your work over a 5 and 10 year period and focus all your efforts towards that goal. A set of quality publications that are coherent in terms of an overarching question or theme are more important than many publications touching on a lot of different subjects.

If you could have dinner with a famous palaeontologist (living or dead), who would you choose?

I would love to go for dinner with Tom Harris and learn about his exploits in East Greenland in the 1920s. I would also like to have dinner with Marie Stopes. She seems to have been a formidable woman and palaeobotanist who was an innovator of women’s rights.

For jobs in academia the following websites may be useful, as well as individual university’s websites: