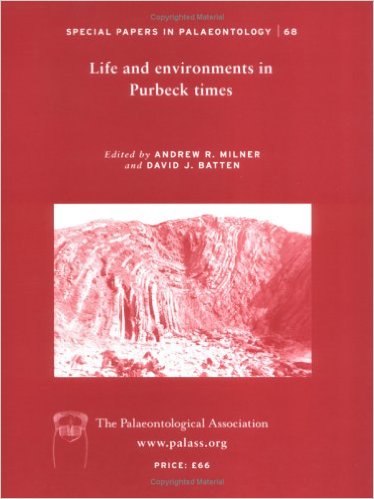 Please note: This Special Paper in Palaeontology consists of 16 individual articles. Unfortunately we do not currently have a digital version of the original paper publication, and as such these articles are not currently able to be downloaded.

The Purbeck Limestone Group is characterized by the diversity of its lithologies and fossil content. The thinly bedded succession in Dorset reflects changing sedimentary environments in a predominantly shallow-lagoonaV lacustrine depositional area during very latest Jurassic and earliest Cretaceous times. Much of environmental significance can be inferred from the occurrences of particular fossil taxa, although there remains considerable scope for correlating taxonomic group associations with the frequently-changing, wide-ranging salinity levels that are indicated. It is more difficult to determine what animal life was like on land because the remains of vertebrates consist mainly of teeth and very small pieces of bone. Together with the footprints of dinosaurs, these fossil fragments provide a tantalizing glimpse of a diverse fauna. The plant macrofossil record is notable for coniferous tree stumps and cycadophyte trunks preserved in situ in lowland soils, but is otherwise rather poor. It is widely accepted that the climate was semi-arid during the deposition of the Lower and lower Middle Purbeck beds but became progressively more humid subsequently. The change from palynological assemblages dominated by gymnosperm pollen grains, including those known to have been produced by the lowland conifers, to those with greater percentages of spores of ferns and other pteridophytes reflects this development. The probability that the hinterland of low hills was covered by vegetation of savannah- or chaparral-type for much of the time is consistent with the spore/pollen record, but no inferences on the composition of particular plant communities are possible. Further work on the fauna and flora of the succession will undoubtedly not only lead to the discovery of many more taxa than have been described hitherto but also throw further light on life and environments in Purbeck times.