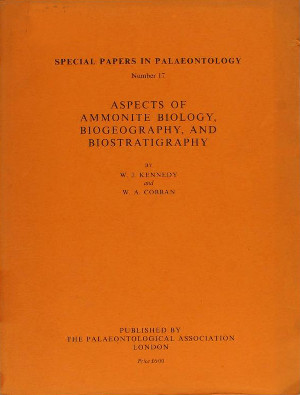 All ammonites appear to have passed through an initial planktonic larval stage, after which some assumed a nektobenthonic existence while others remained essentially nektonic or planktonic. Many may have lived segregated by sex or age, and juvenile and adult habitats may also have differed. Functional analysis of the shell and of what is inferred about ammonite musculature suggest that ammonites were generally poor swimmers when compared with many extant cephalopods. They were, however, well-adapted for depth changes as a result of their capacity to vary their density in relation to sea-water. Most appear to have exploited low levels in food chains and were perhaps largely benthonic herbivores or plankton feeders; some may have been higher-order carnivores and scavengers. They were in turn preyed upon by a variety of vertebrates and invertebrates, whilst several examples of cannibalism arc known.

Distribution pauerns shown by the group reflect both the occurrence of living animals and dispersal as a result of post-mortem drift. In general, five types of distribution are recognizable: pandemic. latitudinally restricted, endemic, disjunct, and post-mortem. Broad biofacies associations can sometimes be recognized, but there is no consistent pauern of relationship between morphotypes, or between morphotypes and presumed environments. The group as a whole is highly independent of facies in normal marine sediments, although there are subtle relationships between relative abundance within faunas. and sedimentary facies. Some heteromorphs show marked facieslinked distributions, which may reflect their benthic habits: yet others are facies independent.

Ammonites provide a biostratigraphical framework with zonal durations of as liule as 0.2 million years, whilst global correlations of Triassic to Cretaceous sequences with a precision of from 0.5 to 3.0 million years zonal duration have been established. Evolutionary rates varied markedly within the group. When measured in terms of species longevity, the range is from 0.2 to 25.0 million years. There is no apparent link between species longevity, zonal duration, and regressive-transgressive cycles, although the broader pallerns of evolution and extinction may be so related. Use of the group in biostratigraphy is limited by several factors, including limited geographic distribution. high intraspecific variability which masks geographic versus stratigraphical differences in populations, homeomorphy, sexual dimorphism, and problems of preservation and dissolution of the shell.

The broader geological implications of the distribution of ammonites in space and time are illustrated by five examples: