Monograph: Miospores in the coal seams of the Carboniferous of Great Britain 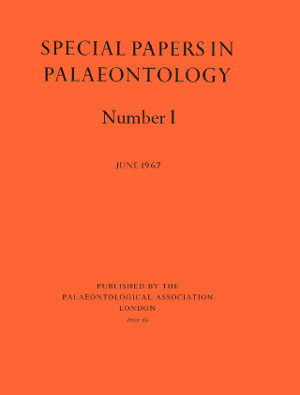 The use of dispersed miospores isolated from coals for the subdivision of the Carboniferous of Great Britain and in the solution of problems of seam correlation is described. Eleven spore Assemblages are recognized ranging from the Vistan to the Westphalian D, or possibly Lower Stephanian, based on sequences of seams from all the major British coalfields. The Assemblage boundaries are based, as far as possible, on the first appearances of new species. The diagnostic species of each Assemblage are listed and the frequencies of the common spores are shown for each coalfield. The geological factors which determine the nature of spore profiles within seams are considered as a necessary background to the use of spores in seam correlation. The use of statistical methods including discriminatory analysis is discussed and sections are included describing spore morphology and methods of maceration. Systematic descriptions of 204 species of 63 genera are given, the palaeobotanical relationships of these genera and the frequencies and ranges of each species being included. The majority of the species are referable to previously described types, but one new genus, Grumosisporilts, and six new species are proposed - Cyclogranisporilts multigranus, Acanthotriletes triquetrus, Convolulispora jugosa, Rotaspora crenulala, Denosporites gracilis, and Punctatosporites oculus. A revised scheme of supra·generic classifica tion based on Denmann (1963) is proposed.