Article: Analysis of morphological variability in the clam shrimp Eosestheria middendorfii (Crustacea, Spinicaudata) from the Lower Cretaceous of China, and its implications for spinicaudatan taxonomy 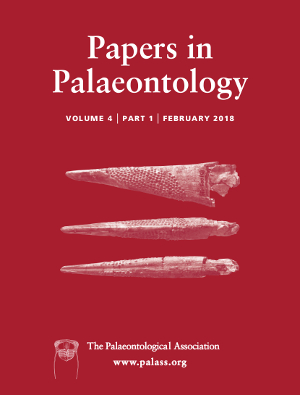 Unresolved taxonomic issues regarding spinicaudatans, clam shrimps that formed the most abundant faunal element in the lacustrine Barremian to Aptian Yixian Formation, have hampered palaeoecological and evolutionary interpretations of this key fossil group. Here, we analyse morphological variability in East Asian clam‐shrimp taxa by quantifying: (1) size and shape; and (2) ornamental features (radial lirae distances). Intergeneric variability was examined using 51 specimens of various East Asian Mesozoic taxa, 16 of which were chosen for a taxonomic revision of the 10 species described from the Yixian Formation of western Liaoning. Geometric morphometrics proved to be effective for the separation of genera, while the quantification of ornamental features was species‐diagnostic. Various authors have previously indicated the possibility that East Asian clam‐shrimp species have been split excessively, a criticism that has been confirmed by our analyses. According to our results, four of the ten species described from the Yixian Formation are valid, of which one might represent a junior synonym of Diestheria jeholensis; five taxon names represent junior synonyms of Eosestheria middendorfii (Jones), and one a nomen dubium. According to lirae distances and analysis of shape, Eosestheria fuxinensis, the original type species of Eosestheria, is synonymous with the type of Diestheria. Therefore, a new type species for Eosestheria is warranted and here fixed as E. middendorfii. This taxonomic revision questions the high level of clam‐shrimp diversity recognized within the Yixian Formation, and indicates that many of the species described in fact represent various ontogenetic stages of E. middendorfii.