Article: The dentary of Wareolestes rex (Megazostrodontidae): a new specimen from Scotland and implications for morganucodontan tooth replacement 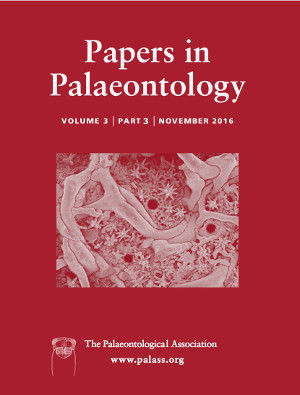 The Middle Jurassic morganucodontan, Wareolestes rex, was previously known from only four isolated molars from Kirtlington, England. There has been debate over the position of the holotype tooth as an upper or lower molar. We describe a new Wareolestes specimen from the Kilmaluag Formation of Scotland: a partial left dentary with two erupted molars, one unerupted molar and three unerupted premolars. Empty alveoli for a canine, p1 and p3 are also present. Through detailed comparison of the morphology of the holotype and our new material, we support the original diagnosis of the holotype Wareolestes as a lower molar, most likely m1. The position of erupted and unerupted replacement teeth in the newly discovered specimen supports a diphyodont pattern of tooth replacement of premolariform dentition in Wareolestes, as suggested for other morganucodontans such as Morganucodon, Megazostrodon and Dinnetherium. However, damage to the dentary means that questions remain regarding the sequence of replacement in Wareolestes along the tooth row.