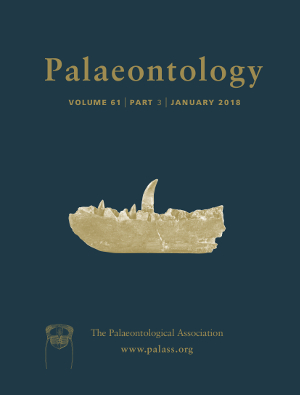 Hyoliths are a group of Palaeozoic fossils with calcareous shells whose affinities remain controversial. As their shells were originally aragonitic, their fossils are usually coarsely recrystallized, and few data on their microstructure are available. We report hyoliths from the middle Cambrian (Drumian, Floran) Gowers Formation of the eastern Georgina Basin, Queensland. These are preserved as phosphatic internal moulds, often with the inner layers of the shell also partly replaced by phosphate. Microstructural details preserved by this early diagenetic phosphatization show that these hyolith conchs were originally composed of fibrous crystallites, c. 0.5 μm wide, parallel to one another and to the inner surface of the shell. In several species, the fibres are arranged in a plywood‐like structure composed of multiple lamellae with a different fibre orientation in each lamella: often they are transversely oriented (relative to the long axis of the conch) in the inner part of the wall and longitudinally oriented in the outer part. Opercula also show a microstructure of parallel fibres. The lamello‐fibrillar microstructure we report from hyoliths is reminiscent of microstructures of many Cambrian molluscs; that this microstructure is found in both conchs and opercula suggests that these structures are serial homologues of one another, and in this respect they resemble brachiopod valves. As with many other biological plywoods, the hyolith shell probably records self‐organization in a liquid‐crystal‐like organic matrix. This provided a straightforward way to construct a material that could resist stresses from different directions, offering an effective defence against predators.