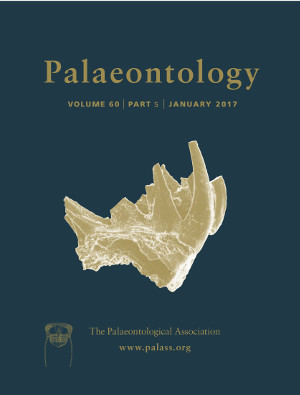 Amber from the Triassic (Carnian) of Lunz, a locality which has produced a rich and famous fossil flora, was analysed using UV‐B‐fluorescence, attenuated total reflectance Fourier transform infrared spectroscopy (ATR‐FTIR) and pyrolysis gas chromatography mass spectroscopy (Py‐GC‐MS). The amber is classified as a class Ib resinite based on its chemical composition, which is characterized by bicyclic products derived from a regular labdatriene structure and the absence of succinic acid. The presence of diterpenoids and absence of triterpenoids is clear evidence of a gymnosperm origin for the Lunz amber, and the prevalence of sesquiterpenoids and diterpenoids point to a conifer family as a possible botanical source. In search of amber attached to identifiable floral remains we have screened new and historical collections of the macroflora from a number of localities of the Lunz area using UV‐B, and describe a striking yellow UV‐B‐fluorescence of cuticles of pteridosperms, ginkgophytes and conifers. This varies with the diagenetic state of the sediment and may be lost altogether. Detectable amounts of fluorescent compounds were observed in gymnosperm taxa, but not in any ferns and only very weakly in horsetails. This underlines that fluorescent compounds are derived from gymnosperm plants, mostly likely arising secondarily from cyclic hydrocarbons by desaturation during diagenesis as a parallel process in amber as well as in cuticles.