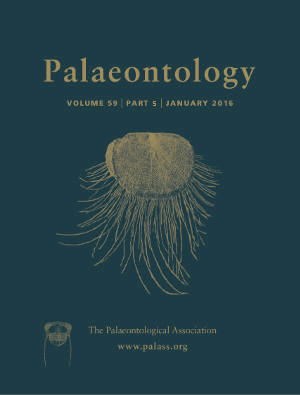 We report evidence of one of the oldest known animal migratory episodes in the form of queues of the eyeless trilobite Trimerocephalus chopini Kin & Błażejowski, from the Late Devonian (Famennian) of central Poland. In addition, there is evidence for two morphs in this population, one with nine segments and the other with ten. We infer that these queues represent mass migratory chains coordinated by chemotaxis, comparable to those observed in modern crustaceans such as spiny lobsters, and further suggest that the two forms, which occur in an approximately 1:1 ratio, may be dimorphs. These ancient arthropods may have migrated periodically to shallow marine areas for mass mating and spawning. The sudden death of the trilobites in the queues may have been caused by excess carbon dioxide and hydrogen sulphide introduced into the bottom water by distal storm disturbance of anoxic sediments. This study demonstrates the potential for further research on the evolution and ecology of aggregative behaviour in marine arthropods.