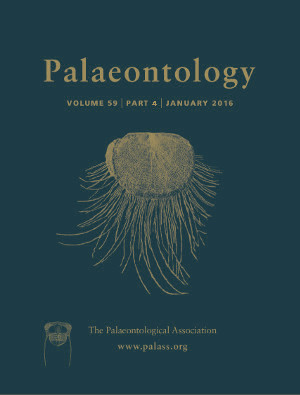 The Emu Bay Shale Lagerstätte (Cambrian Series 2, Stage 4) occurs on the north coast of Kangaroo Island, South Australia. Over 50 species are known from here, including trilobites and non‐biomineralized arthropods, palaeoscolecids, a lobopodian, a polychaete, vetulicolians, nectocaridids, hyoliths, brachiopods, sponges and chancelloriids. A new chelicerate, Wisangocaris barbarahardyae gen. et sp. nov., is described herein, based on a collection of some 270 specimens. It is up to 60 mm long, with the length of the cephalic shield comprising about 30% that of the exoskeleton. The cephalic margin has three pairs of bilaterally‐symmetrical small triangular spines. A pair of small eyes is placed well forwards on the ventral margin of the cephalic shield. The trunk comprises 11 segments that increase in length while narrowing posteriorly, each possibly bearing a pair of biramous appendages; the most posterior segment is almost square whereas the others are transversely elongated. The spatulate telson is proportionately longer than in taxa such as Sanctacaris, Utahcaris and Leanchoilia. Up to eight (?four pairs) of 3 mm‐long elements bearing alternating inward‐curving short and long spines beneath the cephalic shield are interpreted as basipodal gnathobases, part of a complex feeding apparatus. A well‐developed gut includes a stomach within the cephalic shield; it extends to the base of the telson. In a few specimens there are shell fragments within the gut, including those of the trilobite Estaingia bilobata (the most common species in the biota); these fragments have sharp margins and extend across the gut lumen. The species may have been a predator or a scavenger, ingesting material already broken up by a larger predator/scavenger. The morphology of this taxon shares many overall body features with Sanctacaris, and some with Sidneyia, particularly its gnathobasic complex. These chelicerate affinities are corroborated by phylogenetic analyses.