Article from: Newsletter No. 98
Written by: Chris Manias
PDF: No article PDF

From the beginnings of research into the Earth’s deep past in the late eighteenth century, extinct animals, narratives of life’s history and accounts of palaeontological discovery have had a strong hold over public audiences.  But why is this, how has this affected the development of palaeontology as a science, and what has been the long-term impact of palaeontology on the public?  These are big questions that are currently being thought about – not just in palaeontology and science communication, but also in the media, museums, and the humanities and social sciences.

As a historian of science, I started working on a project on the history of palaeontology a few years ago, with some of these questions in mind.  I noticed how people from a variety of subjects – like the history of science, English literature and sociology – were interested in examining palaeontology as an example of a “popular science”, and that palaeontologists, museum professionals, artists and science communicators were very interested in the history of their fields and the phenomenon of popular science more generally (as well as conducting lots of really interesting outreach projects).  There seemed to be great potential in getting people together to really get to grips with these issues, which very much require multiple perspectives to understand.

With some support initially from my University (King’s College London), and now with an International Research Network grant from the UK Arts and Humanities Research Council, I’ve started to organize a series of workshops and public engagement events to investigate these themes.  Partly this involves examining the ways that palaeontological subjects have been presented through science books, lectures, talks, artworks, film, computer games and other media.  It is also important to think about why some subjects – such as dinosaurs, exotic fieldwork, and human origins – have dominated public presentations, while other aspects of the discipline have often been neglected.  Over the years, palaeontology has affected bigger public debates on issues like the environment, nature, animals, evolution and the place of science in society, and considering how this has worked is another major topic.  And a final aim will be to think about new directions that palaeontological outreach and engagement can take.

The first workshop was held in September 2016 at King’s College London.  A number of papers raised the importance of the connection between art and science (Darren Naish and John Conway), and the popular presentation of particular organisms – specifically Azhdarchid Pterosaurs (Mark Witton), George Gaylord Simpson’s 1951 book Horses (Joe Cain), and Mesozoic mammals (Elsa Panciroli).  The relative profile of specimens and subfields was also an important topic, with Mark Carnall talking about “underwhelming fossils” in museum collections, and Elizabeth Jones discussing the rise of ancient DNA research as a “celebrity science”.  Another set of papers tackled the popularization of palaeontology in the early twentieth century, particularly focusing on dinosaur research in Germany (Marco Tamborini, Ilja Nieuwland and Mareike Vennen) and human origins studies in the USA (Marianne Sommer).  We also talked about particular media presentations, like Pixar’s The Good Dinosaur of 2015 (Will Tattersdill) and Henry Neville Hutchinson’s extremely popular and influential 1892 work, Extinct Monsters (Richard Fallon).  We then finished with two fascinating papers on current outreach projects: Shaena Montanari on her Dinosaur Doctors initiative, using palaeontology in children’s hospitals; and Dave Marshall on the development of the Virtual Natural History Museum, an online palaeontological resource.  Both of these outreach projects had been enabled by the PalAss Engagement Grant scheme. 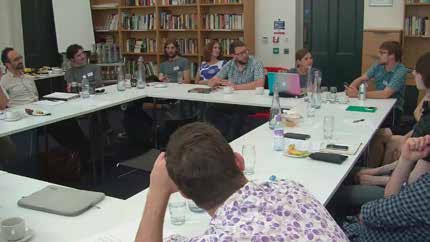 The Palaeontological Association
Discussions at Popularizing Palaeontology Workshop I in September 2016.

In the second workshop in December 2017 we moved to some questions that were left unresolved from the first event, namely: why popularize palaeontology at all?  And what potential risks are there in this process?  A series of papers from museum and historical perspectives (Mark Carnall, Liz Hide and Ilja Nieuwland) examined some of the competing reasons for this, and also some of the major challenges and problems that this can throw up.  We also had talks on outreach in palaeontology (Steve Brusatte) and archaeology (Lorna Richardson), and a discussion of how children became a key audience for palaeontological outreach by looking at 1900s fiction (Richard Fallon) and the changing presentation of Mary Anning (Melanie Keene).  The discussion of the relationship between art and palaeontological science also continued: Paul Brinkman talked about the art and career of John Conrad Hansen at Chicago’s Field Museum; and Katrina van Grouw talked about her experiences integrating Mesozoic themes into her art and writing.  Finally, we thought about the relative predominance and appeal of particular palaeontological topics, with Paige Madison examining the presentation of the Taung Skull in the 1920s, and Darren Naish going over the biased emphasis on particular organisms and groups in review texts. 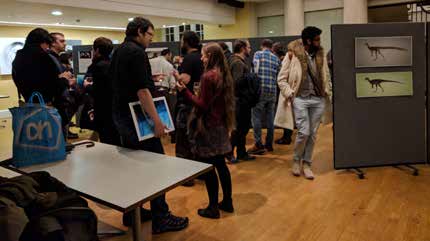 An additional thing I would like to do with this network is to integrate public engagement and outreach activities with the more academic events.  As such, on the evening of the first day we held a pop-up exhibition of palaeoart, featuring displays from Beth Windle of thylacines and Pleistocene hyenas, John Conway with life-sized illustrations of Velociraptor and other (relatively small) dinosaurs, and Mark Witton and Bob Nicholls gave overall displays of their works.  The artists also gave some fascinating talks in a nearby lecture hall on their methods of reconstructing extinct animals, and John Conway finished off by placing palaeoart within the wider history of art.

The first two events were a great success and fulfilled the main aim of connecting specialists from different fields to discuss the common problems around the public role of palaeontology.  To continue the discussions we will be holding four more workshops over the next two years, with the following themes and questions:

May 2018 – Representations (Artis Library, University of Amsterdam).  Thinking about some of the major stereotypes, cultural references and images associated with palaeontology.

December 2018 – Debates (King’s College London).  How the public discussion of palaeontology has connected with wider debates on scientific, social and cultural issues, ranging from evolution, ‘progress’, nature, biodiversity and spectacle.

Spring 2019 – Objects (North Carolina Museum of Natural Sciences).  How particular palaeontological objects have been presented and discussed in public contexts, whether these be organisms, specimens, institutions (such as museums and research laboratories), or individual palaeontologists.

September 2019 – Media (London).  Focusing on particular forms of popular media used for the presentation of palaeontological themes (such as film, documentaries, exhibition displays, newspaper stories, books, novels and lectures) and the role that the media has had in conditioning the interaction between scientists and publics.

If you are interested in getting involved in the network or coming to any of the events please do get in touch, and if you cannot make the events themselves then all the papers will be recorded and uploaded to the network website as audio and video, along with blogposts from the participants.  You can also look out for the #PopPalaeo hashtag on Twitter.  More information, a contact form and the videos from the first two workshops can be found at www.poppalaeo.com.