Article from: Newsletter No. 98
Written by: Fiona Gill
PDF: No article PDF

As reported previously, the Palaeontological Association has commissioned consultants Parigen to carry out a study into the diversity of the Association membership and palaeontology more broadly.  The study was carried out between November 2017 and May 2018 and quantitative and qualitative data from Association members and non-members were collected by means of an online survey, focus groups at the Annual Meeting 2017, and formal and informal interviews with current and former palaeontologists.  We were delighted by the support for the study, with a membership response rate of 41% and 585 full responses to the survey in total.

Survey responses were received from palaeontologists from 39 different countries, demonstrating the international nature of the Association, but by far the largest response, 50% of the total, came from UK residents.  Palaeontologists from a range of sectors responded to the survey, although unsurprisingly universities and museums were the most common employers (see Figure 1). 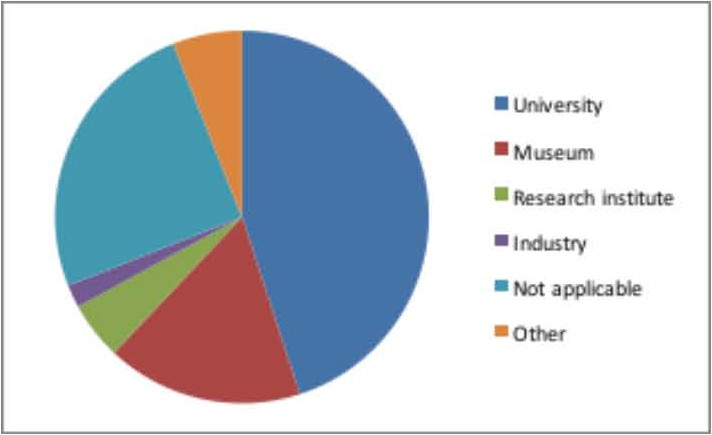 Some of the key issues raised by respondents are outlined below.

There was a strong feeling that the Association should make more efforts to promote palaeontology to currently under-represented groups, particularly people from ethnic minorities and less affluent backgrounds.

Many observations were made about the attrition of women in palaeontology with advancing career stage and the promotion of gender equality more broadly.

A need for career advice and support for those at early career stages was highlighted.

Respondents were keen to see the Association review its own activities, including the Annual Meeting and the allocation of prizes and awards, to make them more inclusive and to increase the transparency of the associated processes and decisions.

Overall, there was a sense that many palaeontologists want to promote their discipline as being diverse, exciting, relevant, and welcoming to everyone, incorporating a wide range of sub-disciplines and different ways of contributing.  As  one survey participant put it: ‘Diversity is central to generating debate and keeping palaeontology in the spotlight as a relevant discipline in the modern world’.

PalAss Council will be carefully considering the findings and recommendations from the study and formulating a diversity action plan over the coming months, which will be reported in future Newsletters and at the 2018 Annual Meeting.