Article from: Newsletter No. 90
Written by: Elsa Panciroli
PDF: No article PDF

The annual Symposium for Vertebrate Palaeontology and Comparative Anatomy was held in Southampton this year, a city with a thriving harbour, excellent university and world-leading (and very welcoming) Vertebrate Palaeontology Group.  The reception and conference took place at the National Oceanography Centre (NOC).  This modern, airy building is one of the largest bases for marine science, deep-sea research and technological development in the UK.  Thanks to the Jones-Fenleigh Memorial Fund, I was able to attend SVPCA to present my own work, as well as to find out about the latest research by fellow vertebrate palaeontologists.  The week began with an evening reception at the NOC; Gareth Dyke opened sessions the following morning.

Alexander Kellner was tasked with the first in a series of pterosaur presentations, discussing the surprise second egg discovered inside Chinese pterosaur, Hamipterus tianshanensis.  Later, Darren Naish recapped the major finds and reinterpretations from Romania’s Hateg Basin, then delighted us with a flying turtle, a Cretaceous super-owl, and his ability to pronounce tongue-twisting nomenclature (pyramicephalosaurine polyglyphanodontid borioteiioids, if you please).  Cindy Howells talked about the exciting new theropod from Lavernock Point in Wales: “don’t ever mention Tyrannosaurus rex if you don’t really mean it,” she warned with some exasperation, “that’s all the press will ever say!”  A montage of media headlines confirmed her point.  However, the success of the outreach work surrounding this British discovery is undeniable.

After refreshments, Daniel Vidal shared Spinophorosaurus tail motion models and implications for tail adornment.  Michael Taylor et al.’s anatomical observation of Star Wars Starfighter-shaped brontosaur vertebrae led them to suggest that brontosaurs had spikes along the length of the neck, perhaps for intra-species competition.  We returned from lunch to hear Diane Johnson sharing the fossil finds of ancient Egypt.  Thought to be offerings to the god Seth, their archaeological context is yet to be fully explored.  We enjoyed Vincent Beyrand’s beautifully animated presentation on correlations between bird brain morphology, ecology and locomotion.  Peruvian penguins came next with Ursula Göhlich, and then the convergent loss of flight – or as Nicholas Chan pointed out: the reacquisition of terrestrialism – in birds.

Marco Castiello kicked off day two with a plea to palaeoartists to “please draw more fish!”  Timothy Smithson’s presentation on the position of the entepiconylar foramen in basal tetrapods presented a tantalising way to assess their transition onto land.  Eduardo Ascarrunz took us forwards to the origins of lissamphibians and an amazing Madagascan Triadobatrachus massinoti specimen, splayed out like pot-bellied Triassic roadkill.  Donald Henderson’s fieldwork in Alberta – a province that would swallow the UK many times over and still have room for an after-dinner mint – has recovered amazing Late Cretaceous dinosaur trackways, including a single Tyrannosaur footprint.  Crocodylomorphs dominated the after-lunch presentations: Mark Young presented a marine crocodylomorph from the Mid Jurassic/Early Cretaceous, while Davide Foffa described the UK’s first teleosaurid mandibular material from the Corallian Gap.  Pholidosaurus came next, re‑described by Southampton postgrad Thomas Smith.  Max Stockdale rounded off these sessions with an examination of crocodylomorph evolutionary patterns and diversity.

Posters were displayed in an adjacent hall by earliest career researchers to seasoned palaeontologists.  There was a constant crowd around a 3D-printed poster, but my personal favourite was by Sophie Regnault et al. on the puzzling evolution of the ossified mammal kneecap.  Back in the theatre, we travelled into the ear canal of mammals with Joanna Baker, and surveyed the cranial ontogeny of basal synapsids with Maren Jansen.  The final talk of the day was from Mark Witton, whose palaeoart sets a gold standard for reconstruction.  He highlighted the way images resonate with the public and influence our ideas for decades.  Yet unfortunately there is also rampant copying, and a lack of recognition for those original artists who spent hours researching the palaeontologically-accurate images that bring our science to life.  I’ll certainly be budgeting for good-quality palaeoart in my own future research.  Several such artworks were included in the auction that evening: a runaway success that generated £1,942 to help fund future SVPCA attendees.

On the final day, it was my turn to take to the stage with an overview of my MSc project looking at Carnivora ankles, before Jamie MacLaren showed us his tapir limbs.  Chris Basu was sporting a home-made “Giraffid Park” T-shirt during his Sivatherium body-mass presentation, and Gertrud Rössner examined the earliest antlers (~19 Ma) to answer questions about the evolution of shedding cycles.  We returned from a refreshment break to the subject of mammal teeth.  Christine Janis then turned from teeth to elbow rotation in Thylacoleo carnifex, with a potentially pivotal role in hunting and killing strategy.  I was excited to hear about Elis Newham’s research on endothermy in Mesozoic mammals, explored through reconstruction of tooth cementum using synchrotron scans.  We plunged headlong into a fishy session containing the funniest set of talks of the conference.  John Clarke compared the rise of Holosteans and Teleosts to the British Empire and the present day United States.  The unforgettable Jeff Liston continued the laughter during his presentation on pachycormid suspension feeders, somehow getting the work of Francis Bacon into his slides alongside comedy palaeoart (commissioned the night before).  Southampton’s own Jessica Lawrence-Wujek presented her comprehensive work on ichthyosaurs, before another Southampton student, Luke Muscutt, used his engineering background to explore plesiosaur hydrodynamics.  The final talk was by Nick Longrich, presenting the recently-described Early Cretaceous snake.  Controversies aside, he talked us through the specimen’s snake synapomorphies, before discussing the behavioural implications of the limb anatomy. 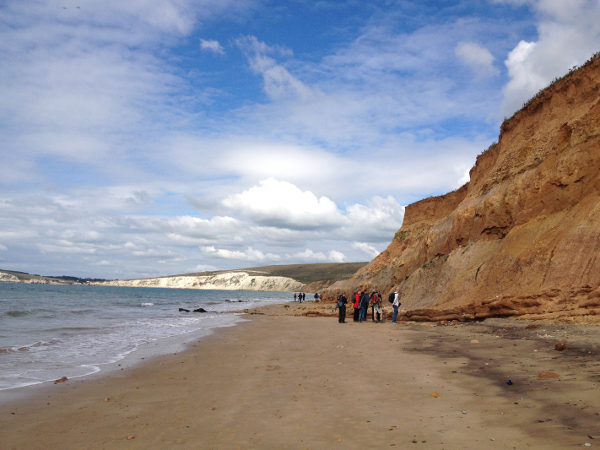 The field-trip the next day transported delegates to Mesozoic England: the Wealdon of the Isle of Wight.  The delegates zealously beachcombed from Chilton Chine to Compton Bay, examining Cretaceous ornithopod footprints and enjoying the clement weather.  They spent time at the Dinosaur Isle Museum in Sandown and enjoyed a hearty pub lunch, before returning to the mainland to recover and prepare for next year’s sojourn into the world of vertebrate palaeontology and anatomy.  SVPCA 2016 will be held in Liverpool – check out www.svpca.org for the latest information (details and dates TBC).  To find out what people were saying at the SVPCA 2015 and more about the recent discussion of the future of SVPCA, take a look at #SVPCA on twitter. PalAss/Laura Säilä
A Cretaceous ornithopod footprint on the Isle of Wight.