Product: 062 Exceptionally preserved conchostracans and other crustaceans from the Upper carboniferous, Ireland. 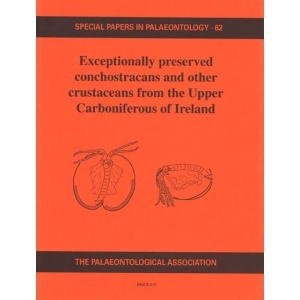 Special papers in Palaeontology: 62
<br />1999
<br />
<br />Exceptionally preserved conchostracans and other crustaceans from the Upper carboniferous, Ireland.
<br />P J Orr and D E G Briggs
<br />
<br />68 pp., 37 figs
<br />
<br />ABSTRACT. The Castlecomer fauna from the Leinster Coalfield in south-eastern Ireland is an arthropod-dominated Konservat-lAgerstiitte of basal or early Westphalian (Late Carboniferous) age. The fauna has been recovered from finely laminated siltstones and mudstones in core from the Ardra and Hollypark boreholes. Spinicaudatan (&#039;conchostracan&#039;) branchiopods are the most abundant exceptionally preserved faunal element: Limnestheria ardra Wright occurs in the Ardra core, and Limnestheria gracilis sp. novo in the Hollypark core. The carapace valves of other conchostracans, a single pair of ostracod valves and an elongate, ?setose, problematicum occur in association with L ardra. A more diverse ostracod fauna (some with appendages preserved) occurs with L gracilis together with single specimens of an unidentified eumalacostracan, a probable syncarid and Waterstonella sp.
<br />Limnestheria is confirmed as the earliest example of the superfamily Limnadioidea Baird and the family Limnadiidae Baird. The first two pairs of trunk appendages were modified as claspers in the male of L ardra, not solely the first pair as in most previous interpretations. The claspers were prone to displacement from life position during transport and burial; during post-burial decay the claspers rotated and collapsed into more stable attitudes than those at which they were deposited. The strong anatomical similarities betWeen Limnestheria and extant spinicaudatans confirms that their external morphology has remained essentially unmodified since at least the Late Carboniferous.