Product: 042 The Palaeocene flora of the Isle of Mull. 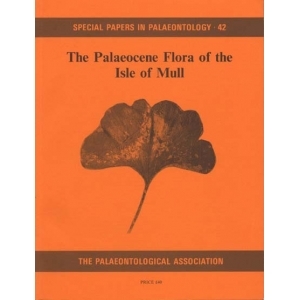 Special papers in Palaeontology: 42
<br />1989
<br />
<br />The Palaeocene flora of the Isle of Mull.
<br />M C Boulter and Z Kvacek
<br />
<br />149 pp; 23 pls.
<br />
<br />ABSTRACT. The same assemblage of dinoflagellate cysts, pollen and spores is found in intra basaltic sediments offshore at the Rockall Plateau and the Norwegian Sea, and onshore at the Isle of Mull, County Antrim, the Faeroe Islands, eastern Greenland and Spitsbergen. All but the latter comprise what has been called the BritoArctic Igneous Province (BIP). Palynological work has dated these sediments at around the Palaeocene-Eocene boundary, corroborating evidence from geophysics and geochemistry. The onshore localities have also yielded plant megafossils, many of which have been studied for over a century. We have given detailed attention to these plant fossils, including those curated in the British Museum Natural History, and have incorporated into our modern synthesis of the BIP flora some of Seward and Edwards&#039; hitherto unpublished descriptions and comments, written in the 1930s. The Hamamelididae account for the great majority of the angiosperm taxa represented in the BIP Flora, suggesting that this group of plants was evolving very actively at high latitudes in the northern hemisphere in the Late Palaeocene. The new taxa described are Camptodromites, Juglandiphyllites ardtunensis, and Vitiphyllum sewardii. There are several new combinations of species, and all spores and pollen are described as biorecords. The data indicate an autochthonously preserved flora of limited variety, from the volcanic lowland environments which were associated with the first openings of the northernmost North Atlantic Ocean.