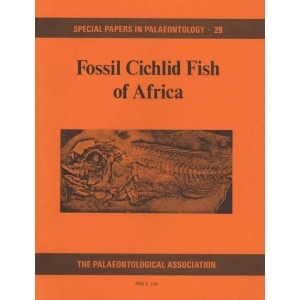 Special Papers in Palaeontology: 29
<br />1982
<br />
<br />Fossil cichlid fish of Africa.
<br />J.A.H. Van Couvering
<br />
<br />103 pp., 10 pls.
<br />
<br />ABSTRACT. Members of the teleost family Cichlidae first appear in the fossil record either in the Eocene of South America (the age of these deposits is questionable) or in the Oligocene of Africa. These earliest known specimens are fully cichlid and tell us little about the origin of the family. Pomacentrids, embiotocids, labrids, scarids, and nandids have all been suggested as sister groups of the Cichlidae, but as yet there has been no detailed work analysing the interrelationships of these families. The similarities between the pomacentrids and cichlids seem to be due to convergence.
<br />Modern cichlids fall into three major subgroups: etroplines, haplochromines, and tilapines. The tilapines are an intermediate group and probably should be classified either with the etroplines or separately, depending on the genus. However, further study of modem forms is necessary before this can be resolved satisfactorily. The ancestral cichlid was probably similar to Cichla ocellaris, although more primitive in some respects.
<br />Twenty different types of fossil cichlids have been described from Afro-Arabia. Five of these are new species formally described here: Macfadyena dabanensis, Palaeofulu kuluensis, Nderechromis cichloides, Kalyplochromis hamulodenlis and Sarolherodon marlyni. Even though these formally described species are based on relatively good material, the evolutionary history of the group is vague. This is because the specimens are difficult to evaluate morphologically, and thus systematically, due to crushing or disarticulation, and also because the record is biased in favour of endemic, lacustrine species which are difficult to relate to the main line of cichlid evolution.
<br />The split between the three subgroups of cichlids probably took place before the break up of the South American-African-Malagasy-Indian portion of Gondwanaland was complete, that is before the middle of the Cretaceous. There is, however, no pre-Eocene and probably no pre-Oligocene record. Pelmatochromis sensu lato, Tilapia sensu lalo, and Haplochromis sensu lalo (cf. Greenwood 1979) all appear by the mid-Cenozoic. No other African extant genera occur in fossil form. Herbivorous forms appear for the first time in the Early Miocene. Repeated events of adaptive radiation seem to have been common in cichlid history.
<br />The fossils suggest zoogeographic ties between East Africa and either Central or West Africa in the Early Miocene, a breaking of these ties concurrent with rifting, and maintenance of equatorial and North African ties at least until the Late Miocene.
<br />Several aquatic community types are known from the record but further work is necessary in order to understand community evolution of these freshwater systems.