Monograph: A phylogenetic analysis of basal sauropodomorph relationships: implications for the origin of sauropod dinosaurs 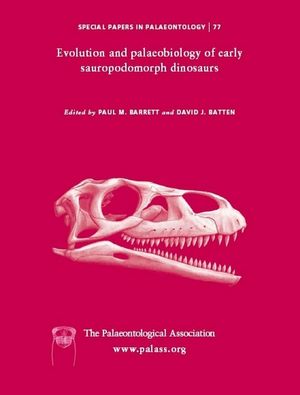 New discoveries, revision of existing taxa and the application of cladistic analysis have all shed light on the relationships of basal sauropodomorphs. Nevertheless, the interrelationships proposed in recent studies have varied widely, with some authors advocating the view that Prosauropoda and Sauropoda are monophyletic sister-taxa, whereas others favour an extreme form of prosauropod paraphyly with respect to sauropods. A data set comprising 292 characters for seven outgroups and 27 ingroup sauropodomorph taxa is presented and analysed. The most parsimonious trees suggest that Efraasia, Mussaurus, Thecodontosaurus and Saturnalia are increasingly more distant sister-taxa to the remaining sauropodomorphs. The latter are divided into two monophyletic sister-groups: a plateosaurian clade containing Plateosaurus, Lufengosaurus, Massospondylus, Coloradisaurus and others, and a sauropod clade, which includes melanorosaurs (near its base), Antetonitrus, Chinshakiangosaurus, Vulcanodon, Barapasaurus and eusauropods. Bootstrap values and constrained analyses with Templeton’s tests indicate that support for many of the proposed relationships is relatively weak. This results from the inclusion of poorly known taxa, such as Blikanasaurus, and from considerable levels of character conflict. Character mapping indicates several apomorphic features that support the monophyly of a plateosaurian clade or subgroups within it. In addition, it appears that approximately 20 apomorphies are acquired early in basal sauropodomorph evolution, but are reversed to the plesiomorphic state in basal sauropods and eusauropods. Aside from their impact on phylogenetic uncertainty, these reversals may reflect important aspects of early sauropod evolution that relate to shifts in the ecological niches occupied by these taxa.