Monograph: Chitinozoa from the Ordovician Viola and Fernvale Limestones of the Arbuckle Mountains Oklahoma 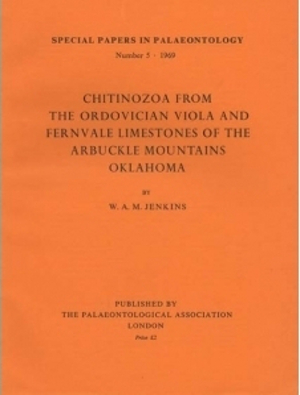 JENKINS, W. A. M. 1969. Chitinozoa from the Ordovician Viola and Fernvale Limestones of the Arbuckle Mountains Oklahoma. Special Papers in Palaeontology, 5, 1–44.

Chitinozoa referable to ten genera, and twenty species of which six are new, occur abundantly throughout the Viola-Fernvale limestone sequence in the Arbuckle Mountains of southern Oklahoma. The chitinozoan fauna is strikingly similar to Upper Ordovician faunas of Europe and comprises two elements. A cosmopolitan element consists of species known also from the Caradoc-Ashgill, C2-F2, of Estonia, Sweden, and Britain and from the Ostseekalk of north Germany, Gotland, and south Finland. A smaller and apparently provincial element consists of species known only from North America, several of which are characterized by a general style of ornamentation that is typical of North American forms and peculiar to the Upper Ordovician. The fauna is described systematically, and a provisional zonation of the Viola-Fernvale sequence is proposed.

The general continuity of the faunal succession indicates that deposition was virtually continuous throughout most of the Viola-Fernvale sequence; this view is strongly supported for the lower half of the sequence by the continuity of the evolutionary series Conochitina robusta-Hercochitina crickmayi f. spinetum-H. crickmayi f. normalis. An abrupt faunal break occurs, however, near the top of the Viola Limestone. Although the magnitude of the depositional hiatus which it represents is difficult to deduce, the break in the faunal succession is quite spectacular. This provides a palaeontological basis for concluding that a significant hiatus exists here and indicates that the uppermost Viola-Fernvale strata are substantially younger than the beds immediately below. The break does not coincide with the change from Viola to Fernvale lithology but lies within the Viola Limestone. No faunal or stratigraphical evidence for a break in deposition has been detected at the base of the Fernvale Limestone.