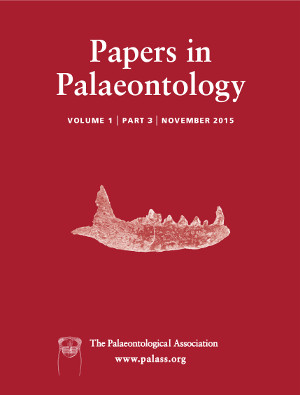 The Cretaceous Langshan Formation, which crops out along the northern portion of the Lhasa block, is composed mainly of grey or grey-black fine-grained limestones, argillaceous limestones and a few thin-bedded siltstones and silty mudstones. From specimens collected and/or photographed in the field, combined with a revision of taxa previously recorded from the Langshan Formation, four rudist taxa are recognized: (1) Auroradiolites gen. nov.; (2) Eoradiolites cf. davidsoni; (3) Magallanesia rutogensis sp. nov.; and (4) Sellaea sp. We propose Auroradiolites gen. nov. for the grouping of SW Asian to Pacific radiolitid species formerly attributed to Eoradiolites and characterized by a compact (non-celluloprismatic) outer shell layer. The new genus is represented in the Langshan Formation by A. biconvexus (Yang et al., 1982), including several other synonymized taxa. Taxonomic confusion in the literature has resulted from the varied appearance of the strongly developed ligamentary infolding in such forms: in the right valve, it has a forked inner termination, but common transverse sections through both valves show the latter juxtaposed against its broad, rounded counterpart in the left valve, giving the combined terminations a bulb-shaped appearance. Associated Eoradiolites cf. davidsoni is of smaller size and, by contrast, shows the celluloprismatic structure of the outer shell layer. The recently described canaliculate polyconitid genus, Magallanesia Sano et al., 2014, is represented by M. rutogensis sp. nov., which differs from the type species in possessing more numerous and ventrally extended canals in the left valve. Possibly belonging with the latter species are isolated right valves, similar to Horiopleura, but containing tabulae. A probable Sellaea sp. is represented by poorly preserved right valves nevertheless showing typical features, including a very thin outer shell layer and an erect posterior myophoral wall, separating off a broad posterior ectomyophoral cavity. Based on the presence of Magallanesia and the orbitolinid record, this rudist fauna is probably no older than late Albian, while a younger age cannot be excluded. Both Magallanesia and Auroradiolites are characteristic of a SW Asian/central Pacific faunal province, while the other two genera are more widely distributed.