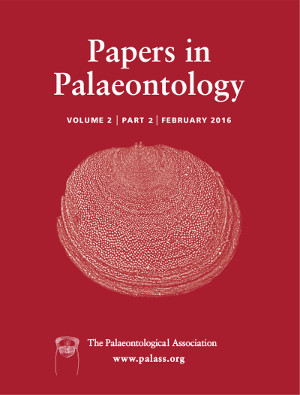 A rich assemblage of Middle Devonian (late Eifelian) polychaete jaws (scolecodonts) from the Blankenheimerdorf section in the type Eifel area, western Germany, is described. The top part of the section also reflects the onset of the global Kačák Event. The sediments of the section were deposited in a shallow to deep subtidal environment on the southern Avalonian margin. The habitat was obviously favourable for jaw‐bearing polychaetes, which are represented by 18 species belonging to 9 genera. The assemblage is dominated by polychaetaspids, followed by mochtyellids, paulinitids and kielanoprionids. Notably, this study documents one of the oldest records of kielanoprionids, a polychaete family common since the Middle Devonian and closely related to the extant Hartmaniellidae. This may indicate that a prominent change in jawed polychaete evolution occurred during the Early–Middle Devonian transition. Moreover, we present new information on polychaete palaeobiogeography, which when compared with previously described Devonian scolecodonts shows that very similar polychaete faunas with many species in common were widespread in today's Europe and North America.