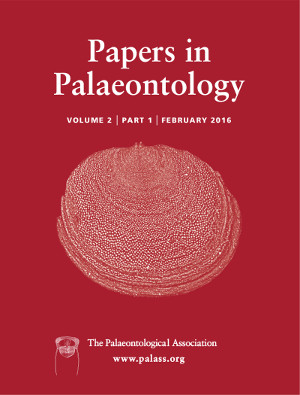 Late Triassic (Carnian–Norian) echinoids from the Aksala Formation in the Lake Laberge area of the Whitehorse Trough, Yukon Territory, Canada, are described. These echinoids comprise the first description of Triassic echinoids from Canada and, with the exception of fragmentary material from Utah, are the only Upper Triassic echinoids on the western coast of Pangaea north of Peru. Triassicidaris peruviensis Smith is identified from a coronal fragment that consists of an ambulacral column and five attached interambulacral plates from a Carnian outcrop succession. Parvicidaris sp., also from Carnian strata, is identified based on a coronal fragment that consists of two ambulacral and three interambulacral columns. This occurrence extends the range of this typically Norian taxon both north to the Yukon and earlier into the Carnian. Additional specimens, identified as Triassicidaris sp., occur within Norian strata of the Aksala taxa, one of which (‘Cidaris’ labergensis sp. nov.) is new. Both the corona‐based taxa and the spine form taxa show mixed affinities with Tethyan and southern New World populations and reinforce the association between Triassic echinoid faunas and reefal settings.