Behind the Scenes at the Museum: The Yorkshire Museum, York, UK

Article from: Newsletter No. 100
Written by: Sarah King
PDF: No article PDF

The collections at the Yorkshire Museum were founded in 1822 by the Yorkshire Philosophical Society (YPS), who are still in existence today. The formation of the YPS happened at a time of great growth for philosophical societies in the north of England; similar societies were founded in Leeds, Whitby, Newcastle and Sheffield, to name but a few.  These societies performed something of an academic function at a time when few people attended universities.  In practice, they were made up of gentlemen with enough time and money to discuss important new discoveries in nature and antiquity, and indeed often with the means to travel widely and collect or exchange such material.  (Women of course were not permitted until well into the 20th century, unless they were able to come up with some cash, usually for the ever-needy buildings fund, and even then they were ‘Lady Subscribers’ rather than full members.)  The YPS was very successful and well respected, leading to a high-quality collection and accompanying library, mostly focused on Yorkshire but covering material from all over the country and the wider world.  For example, in 1864 they acquired an almost complete South Island giant moa skeleton from New Zealand, collected to order, and partly examined and described by Richard Owen. 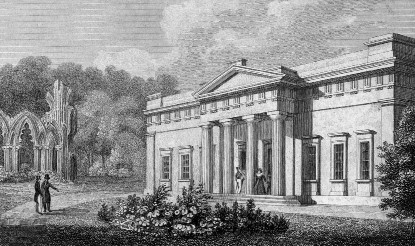 The collections of the YPS grew quickly, requiring construction of the Yorkshire Museum to house them.  The Museum was built over the ruins of St Mary’s Abbey, once the most powerful abbey in the north of England, and is the third oldest purpose-built museum in the UK.  It was completed in time to host the 1831 inaugural meeting of the British Association for the Advancement of Science, now known as the British Science Association.  One of the founders of the YPS, William Vernon Harcourt, was instrumental in founding the BAAS.  The very first meeting of the Museums Association was also held in York, in 1889, due to Henry Platnauer, then Keeper of the Museum, being a cofounder of the organisation.

The impetus for founding the YPS and its collections was the discovery of the Kirkdale Cave fossil fauna, in Kirkbymoorside, about 30 miles north of York.  In 1821 quarrymen discovered unusual-looking bones and teeth within the rocks, which were clearly not from local animals.  These were brought to the attention of William Buckland, who was studying many similar cave sites across Europe.  He identified Kirkdale Cave as a hyena den and that the other animals found in the area, such as hippo and elephant, had been dragged into the cave as food.  He concluded that all the animals had been living in the local area rather than being washed in by the Great Flood.  Indeed, the Kirkdale material formed a major part of his book Reliquiae Diluvianae, published in 1823.  The YPS received a substantial collection of the Kirkdale material, and the collections have flourished ever since.

John Phillips, William Smith’s nephew, was taken on as the first Keeper of the collections in 1826.  The YPS had purchased a copy of Smith’s geological map of Britain in 1824 while the pair were lecturing across the north of England.  The map is now on permanent display.

Today, the Yorkshire Museum is part of York Museums Trust, which was formed in 2002 and includes York Castle Museum, York Art Gallery and York Museum Gardens, which contain the ruins of St Mary’s Abbey.  The collections are wide ranging, covering social history, fine and decorative arts, archaeology and numismatics, and biology and geology, and all are designated by Arts Council England as being of national and international importance.  The palaeontology collections number around 120,000 specimens, including around 300 type specimens.  The collections are comprehensive in their coverage, but are strong in Jurassic fossils (numbering around 10,000), and Quaternary material, especially from the North Sea and the limestone caves of the Yorkshire Dales.  There are also exhaustive personal collections, such as a large collection of Speeton Clay fossils from the Lower Cretaceous, and a reference collection of Pliensbachian-Toarcian belemnites.

The collections are actively used in our schools programme, in volunteer-led handling sessions, in talks and events, and displays and exhibitions, and we regularly host scientific researchers.  Our Lower Jurassic collections are popular, especially our ichthyosaur material.  Our eight-metre-long type specimen of Temnodontosaurus crassimanus is on permanent display alongside the type specimens of Microcleidus homalospondylus and Rhomaleosaurus zetlandicus.  All are accessible to researchers who are sure-footed in cramped spaces!

Our most high-profile activity in recent years was the opening of the ‘Yorkshire’s Jurassic World’ gallery spaces.  This exhibition showcases our material from the Lower, Middle and Upper Jurassic, and we were privileged to have Sir David Attenborough at the grand opening in March 2018.  The exhibition is planned to be in place for five years, and we have a varied programme of events lined up to suit everyone from young children through to academics.  We are also looking forward to the bicentenary of the founding of our collections in 2022, when we will be celebrating historic specimens as well as those donated to us in recent years. 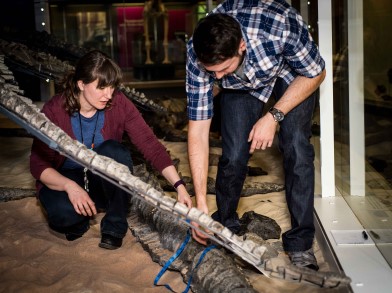 The Yorkshire Museum is open to the public every day, and we welcome research enquiries.  For more information, see the website at www.yorkshiremuseum.org.uk.  The Natural Science collections can also be found on Twitter, @YMT_Science.