Article from: Newsletter No. 90
Written by: Michael Harrison and Raffaella Tolotti
PDF: No article PDF

The 5th Polar Marine Diatom Workshop (PMDW) was hosted by María Angelas Bárcena and hosted 46 participants from 15 nations.  The Workshop included the presentation and discussion of ideas and issues in taxonomy, terminology and identification.  Collaboration in this series of workshops is pivotal in shaping the direction of future research in the field.  While many PMDW attendants are specialists, this community is also focused on increasing student attendance through incentives such as travel grants.  These are in addition to the inherent incentives of receiving training and advice from leading diatom specialists, and gaining insight into current research from leaders in the polar marine diatom community.  More information about the PMDW is available at http://www.polarmarinediatomworkshop.org.

Since the first PDMW in 2005, hosted by Richard Jordan at Yamagata University, Japan, attendance has grown substantially.  The 5th meeting consisted of 14 microscope-based taxonomy sessions, 11 lectures and 20 poster presentations.  A primary objective of the PMDW is the transfer of knowledge and skills to the next generation of researchers.  The Salamanca workshop was immensely successful in this regard, where nearly 70 per cent of attendees were graduate students.  Students attended presentations on the use of diatoms in answering key questions about Earth history, and received first hand training in taxonomy and morphology from fellow students and established diatom specialists through lecture and microscope sessions (Figure 1).  Lectures afforded the opportunity to see various methods currently employed in their respective fields that are useful to data analysis and interpretation of palaeoclimatic and palaeoceanographic conditions, and towards understanding palaeobiogeographic relationships. 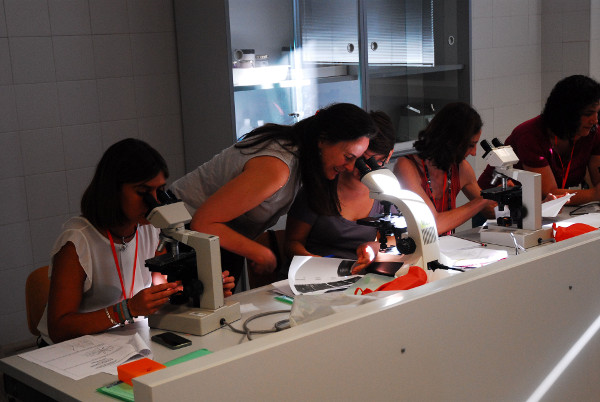 Presented topics ranged between studies of modern and of Paleogene materials.  The slide sessions and lecture presentations can be divided into four general themes:

2) Biogeography: biogeographical patterns of Arctic and Atlantic diatoms in the sub-Arctic Labrador Sea (Fragoso); seasonal and geographical distribution of diatom species in the Southern Ocean and their role in the biological pump (Rigual-Hernandez).

While a larger proportion of presentations were from studies on Recent material, those studies are key to palaeontology.  A robust understanding of modern diatom connections to climatic and environmental parameters is essential for understanding the environmental conditions of past organisms, especially those organisms whose extinctions occurred long before humans could make direct observations.  Studies of morphological characteristics of extant species are also crucial to providing information to interpret palaeontological and palaeobiological characteristics of extinct species and their taxonomic classifications.

To end the workshop, participants took part in a half-day field-trip into Sierra de Francia (mountains in the southern Province of Salamanca), stopping first in Monsagro, a town with many impressive examples of Paleozoic trace fossils built into the façades of the buildings and houses.  The open-air museum has Rusophycus, Skolithos and other trace fossils dating back 430 million years (Figure 2). 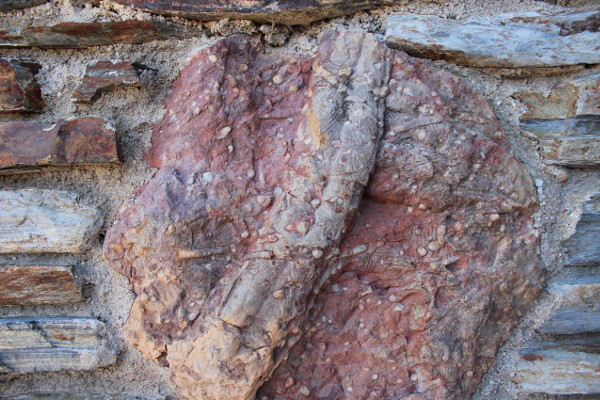 PalAss/Raffaella Tolotti
Figure 2: The open air museum in Monsagro. Building stones contain magnificent trace fossils, remnants of the 430 Ma sea that deposited sediments in the region. This image shows a stone containing a large Cruziana with smaller Skolithos burrows going through and around it.

The second stop was the Nuestra Señora de la Peña de Francia Sanctuary (The Sanctuary of Our Lady of the Rock of Francia), which offered an amazing view of the structural characteristics of the mountains.  The final stop was the Viñas del Cámbrico winery, where owner Fernando Maillo, a biologist, led a vineyard tour and discussed how regional geology and mineral-rich soils play a key role in the development of the grapes used in Cámbrico’s wines.  As the Salamanca workshop ended, participants returned to their research with new experiences, new knowledge and a network of new colleagues to help advance the collective understanding of polar marine diatoms and their application to environmental problems.