The Annual Meeting of the Palaeontological Association will be held at the University Claude Bernard Lyon 1, organized by Gilles Cuny, Bertrand Lefebvre, Vincent Perrier and Jean Vannier, with the help of the “Cellule Congrès” of the University.

The meeting will begin with a Symposium on the afternoon of Wednesday 14th December at the Laënnec building, Domaine de la Buire, at the University Claude Bernard Lyon 1, followed by an evening reception in the Laënnec Building main hall.

The topic for the Annual Symposium this year is ‘Assessing Palaeoenvironments and Palaeobiology through Geochemistry’. 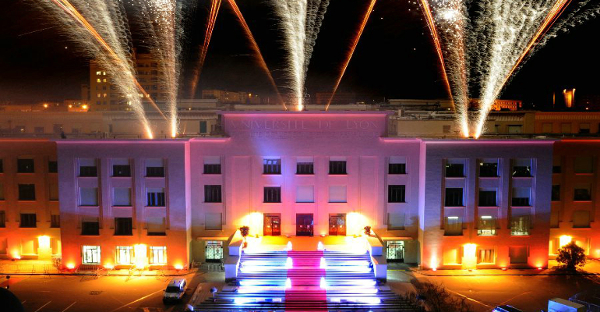 The conference will be held at the Laënnec building, Domaine de la Buire, and will begin on Thursday 15th December with a full day of talks and posters. The Association AGM will take place at the end of the afternoon, followed by the Annual Address given by Prof Manolo Gouy (University Claude Bernard Lyon 1) on the topic “Molecular thermometers: reconstructing the evolutional history of the adaptation to environmental temperature along the tree of life”.  In the evening there will be a nocturnal visit to the new museum, Musée des Confluences (see below), followed by the Annual Dinner (€60) on the banks of the river Rhône.

Friday 16th December will be a full day of posters and talks in parallel sessions (depending on demand).  Talks for both days will be allocated 15 minutes including time for questions. A wine and local products tasting session will be organized at the end of the day.

A hot lunch will be provided to delegates on both the 15th and 16th of December and is included in the registration fee. Attendees will be able to purchase one-day travel passes for public transportation upon arrival at the meeting at a special price of €2.50 instead of the public price of €5.50.

The Musée des Confluences is a science and anthropology museum that opened in Lyon in 2014. It is located at the southern tip of the Presqu’ile at the confluence of the rivers Rhône and Saône. The deconstructivist architectural design, said to resemble a floating crystal cloud of stainless steel and glass, was created by the Austrian firm Coop Himmelb(I)au. 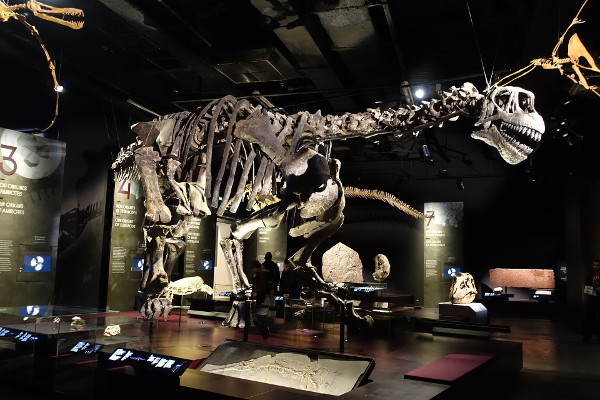 The three major exhibitions deal with the questions "Where do we come from?", "Who are we?" and "What do we do?". The first question concerns the origins and purposes of the Big Bang theory, history of the universe and the different representation of death in cultures of the world. The second question presents man at the heart of biodiversity. The exhibition explains mechanisms of evolution, man's place among the other animal species, and addresses the specificity of man as linked to the brain or on its own performance. The third and final question addresses the functioning of societies: cooperation, competition, creative processes.

A one-hour night visit to the museum is open to delegates just before the Annual Dinner that will take place nearby.  Visitors will have access to the permanent collections and the temporary exhibitions and will be able to enjoy a wonderful view of Lyon at night from the top of the museum. Tickets for this vist are priced at €10 and are an optional event on the Delegate Registration form.

A field trip to the city of Autun, approximately 190 km North of Lyon, is planned for Saturday 17th December.  We will visit the Natural History Museum in Autun as well as the type localities for the Autunian in the area, which have yielded among many other things the temnospondyl Onchiodon (Actinodon) frossardi. Access to the collections of the Museum could be arranged rather than to go in the field for those interested. The field trip costs €30 and is limited to 45 people on a first-come, first-served, basis.

The centre of Lyon is connected to all major French cities by the high-speed TGV trains via the three stations of Perrache, Part Dieu and Lyon-Saint Exupéry.  Lyon Part-Dieu railway station is just two hours from Roissy CDG airport by TGV and there is also a direct connection from London St Pancras to Lyon Part-Dieu, but only on Saturdays during December.  For the rest of the week, you’ll need to change trains either in Lille or in Paris.  It is easier to do so in Lille, as in Paris you’ll need to change stations (from Gare du Nord to Gare de Lyon).  For information see http://www.eurostar.com/.

Lyon is served by a few regular coach services from towns and cities across France; these are often cheaper than trains.  For information see Starshipper Bus (www.starshipper.com/en/starshipper-bus_p191) and Flixbus (www.flixbus.com).

There is limited parking around the University, and almost none on campus, so driving to the meeting venue is not the best option.  Lyon is two hours away from the Alps.  Distances from other cities by road:

An express tramway, Rhônexpress, links the Lyon-Saint Exupéry airport to the central Lyon Part-Dieu railway station in 25 minutes, with departures every 15 minutes, guaranteeing safe swift access to the heart of the city.  Note that it is cheaper to buy the tickets in advance on the Internet or at the station rather than inside the trams.  Website: www.rhonexpress.fr.

The network of metros, trams and buses of the T.C.L. (Transports en Commun Lyonnais – Lyon Public Transportation) enables rapid and easy transport from one place to another in the city and its suburbs through four metro lines, five tram system lines, two cabin transport lines and more than 130 urban bus lines.

Attendees will be able to purchase one-day travel passes for public transportation upon arrival at the meeting at a special price of €2.50 instead of the public price of €5.50.

Registration and booking will commence at the end of June 2016.  Abstract submission will open in mid-July and close on the 19th of September 2016; abstracts submitted after that date will not be considered.  Registration after the 30th of September will incur an additional administration charge of approximately €50, with the final deadline for registration the 15th of November 2016.  Registration and bookings will be taken on a strictly first-come, first-served basis.  No refunds will be available after the final deadline.

Registration, booking and payment (by debit/credit card) is now available online via the Palaeontological Association website (use link below). Abstract submissions will be accepted from mid-July from registered delegates. Instructions on how to submit an abstract can be downloaded here:

Accommodation is available within walking distance of the University and should be booked separately.  Lyon has an accommodation capacity of more than 17,000 rooms in hotels and apartment hotels, which can be booked through the usual online resources (see for example
www.booking.com/lyon-hotels).

The conference organizers will book a block of rooms and studios (up to four persons) at the Appart’hôtel Odalys Bioparc, just behind the Rockefeller Conference Centre.  Prices will range from approximatively  €26 in a shared studio to €110 per person per night.  To make your reservation e-mail bioparc@odalys-vacances.com, using the code ‘UCBL1’.  Please mention the name of the Meeting.  The deadline for reservations is 13th November 2016.  After this date, reservations will still be possible with the code ‘UCBL1’ depending on availability.

The Palaeontological Association runs a programme of travel grants to assist student members (doctoral and earlier) to attend the Annual Meeting, in order to present a talk or poster.  For the Lyon 2016 meeting, grants of up to £100 (or the euro equivalent) will be available to student presenters who are travelling to Lyon.  The actual amount available will depend on the number of applicants and the distance travelled.   Payment of these awards is given as a disbursement at the Meeting, not as an advance payment. Students interested in applying for a PalAss travel grant should contact the Executive Officer, Dr Jo Hellawell (e-mail jo.hellawell@palass.org) once the organizers have confirmed that their presentation is accepted, and before 1st December 2016.  Entitle the e-mail “Travel Grant Request”.  No awards can be made to those who have not followed this procedure.

All speakers (apart from the symposium speakers) have been allocated 15 minutes. You should therefore prepare to present for only 12 minutes to allow time for questions and switching between speakers. We have a number of parallel sessions in adjacent theatres so timing is especially important. All of the lecture theatres have an A/V projector linked to a large screen. All presentations should be submitted on a memory stick and checked the day before they are scheduled. This is particularly relevant for Mac-based presentations as UCBL is PC-based.

Poster boards will accommodate an A0-sized poster presented in portrait format only. Materials to affix your poster to the boards will be available at the meeting.

Attendees who would like to take this opportunity to visit the palaeontological collection of the University Claude Bernard Lyon 1, the largest French university collection, or the palaeontological collection at the Musée des Confluences Centre de Conservation et d’études des Collections need to contact Emmanuel Robert (e-mail emmanuel.robert@univ-lyon1.fr) for the former and Didier Berthet (e-mail didier.berthet@museedesconfluences.fr) for the latter, well in advance of the Annual Meeting, to arrange their visit.

Lyon (www.onlylyon.com/en/visit-lyon.html), Capital of Gaul, is an ancient Roman city and a UNESCO world heritage site.  It is also a world capital of gastronomy with, among many others, Paul Bocuse restaurants.  It is situated in the middle of famous vineyards (Beaujolais – Côtes du Rhône).  The “festival of lights” will take place a few days before the Conference.

The Little Prince (Le Petit Prince) is the most famous of the novels by French writer, poet and pioneering aviator Antoine de Saint-Exupéry.  This poetic tale is named after its main character, a young boy represented in our logo.  The Little Prince is the fourth most-translated book in the world and was voted the best book of the 20th century in France.  Translated into more than 250 languages, it has become one of the best-selling books ever published.  Because Saint-Exupéry was born in Lyon (29th June 1900) and gave his name to the Lyon Airport, we thought it relevant to use the Little Prince as the ambassador for the Annual Meeting in Lyon.  The Little Prince logo is used with kind permission of the Succession Antoine de Saint-Exupéry.  “Draw me a sheep” is a famous catch phrase of the Little Prince and inspired our slogan “Draw me a trilobite”, inviting colleagues to present their work in Lyon.

We look forward to seeing you in Lyon in December