Article from: Newsletter No. 88
Written by: Jo Hellawell and Sally Thomas
PDF: No article PDF 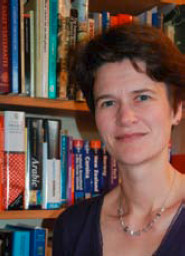 Sally Thomas is a Freelance scientific editor and Publications Officer of the Palaeontological Association.

Her palaeontological career began with a BA in Natural Sciences from Cambridge, specialising in geology, followed by a PhD with Jenny Clack in the University Museum of Zoology, Cambridge, investigating the lateral line system of early tetrapods. Following a graduate training programme at Cambridge University Press, progressing to commissioning editor, Sally had a short stint project managing new GCE qualifications for the exam board OCR, before going on maternity leave. Making the bold decision not to return to formal employment, she instead approached former colleagues for copyediting work in the journals side of the business, building a relationship with the society that owned the journal and eventually taking over management of their submission and editorial process. Sally recently became one of only two employees of the Palaeontological Association, managing both of the Association’s journals.

If you were a scientific paper, what would the title be?

Autographic dyslexia: a study of the inability to spot the errors in one’s own work.

Describe yourself in three words?

When you were a child, what did you want to be when you grew up?

From a young age I was generally interested in the world around me, but I was finally bitten in my first year at university when I took geology as an ‘extra’.

When did you decide to follow the career path you are on now?

I have never really decided on a career path, but have taken opportunities as they have arisen.

What are the main responsibilities of your job?

To manage the submission and production of all papers submitted to Palaeontology and Papers in Palaeontology. This includes helping authors and editors to negotiate the minefield that is the ScholarOne database, checking all papers for potential technical issues that might crop up in production, and trying to steer authors towards journal style before it is too late, a little copyediting and a lot of proof reading.

In an average week, how many hours do you work?

36, although I don’t have a regular work pattern.

How many people do you work with on a daily basis?

On most days I don’t actually see or speak to anyone (at work), but probably correspond by e-mail with around ten different people: authors, editors and the staff at Wiley. Of these, there are two or three with whom I communicate on most days.

What gives you the most satisfaction in your job?

Getting research published in a useful and professional format, and correcting errors before most people have a chance to spot them!

What are the worst things about your job?

Firefighting. Because I deal with a large number of small individual projects, and have no control of when new ones start, it is difficult to spread the load evenly and things tend to come in waves. Solitude can be an issue – I tend to find that when I do meet someone at the end of the day, I can’t stop talking!

What has been the best career advice you have received?

A long time ago I was told that if someone asked if I could do something, and it sounded interesting, I should say ‘yes’ and worry about the detail later. It’s possible to learn how to do many things if you have the incentive, and I’ve found that it has taken me down paths I would not otherwise have explored. So far, I haven’t come unstuck!

What skills does it take to be successful in your job?

Having a very keen eye for detail, being organised, and being able to juggle a large number of small projects at once.

Do you have any tips for students who would like to take a similar career path?

Having a diverse background is a good idea, partly because it opens up opportunities, and partly because I find it useful to know a little bit about a lot of things; it helps you to stand out from the crowd in a competitive job market and it’s always handy to have a potential Plan B. Papers submitted to our journals cover a very wide range of subjects, and a little background knowledge goes a long way. I’ve had a lot of luck getting to where I am now, but some of it I’ve helped along – two of my current jobs only came along because I asked for them.

I work from home and that doesn’t suit everyone. Most major publishers don’t tend to employ people to do the job I do because it’s too expensive; their work is contracted out to general typesetting companies in India and they rely on authors or academic editors to do much of the work I do. It’s not easy to plan a career path.

What’s the best thing about your job?

Flexibility. On one hand, the typesetter in India tends to release proofs at 4pm on a Friday afternoon, and I like to get through them before the author does, but I can also pop into my children’s primary school to help out with the orchestra every week as well as being there for assembly. It’s a question of balance – I try and respond quickly to authors in all time zones, and who tend to work through the weekend, but I can compensate mid-week.

What is your favourite fossil and why?

Ichthyostega which formed the starting point for my PhD. In particular, MGUH fn 1398c, currently on loan to the University Museum of Zoology in Cambridge, as I spent many happy hours staring at it down a microscope and gradually revealing the ornamented surface of the lower jaw one grain of metamorphosed sand at a time with a dental pick.

For jobs in publishing the following websites may be useful, as well as individual publishers’ websites: