Article from: Newsletter No. 93
Written by: Matt Dale and Tom Stubbs
PDF: No article PDF 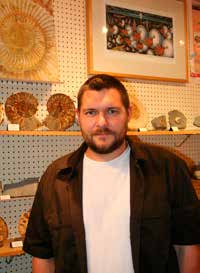 Matt Dale is the proprietor of Mr Wood’s Fossils, Edinburgh’s famous fossil shop. Mr Wood’s Fossils was founded by Stan Wood in 1983. After a period of supplying museums with fossils for display and research, Stan opened a shop in the Grassmarket, a historic market place in Edinburgh’s Old Town. Preferring to be out in the field, Stan hired a small team to manage the shop. Matt took over as the shop’s manager in 1998, having previously studied undergraduate geology (Glasgow), postgraduate museum studies (Leicester) and having worked with fossils in Glasgow’s Kelvingrove Museum. Matt bought the business from Stan in 2006. Mr Wood’s Fossils sells a variety of products, including ammonites, trilobites, dinosaurs and fossil fish, minerals and jewellery.

Where did your passion for geology and palaeontology come from?

I have always had a broad interest in natural history and animals in particular.  I happened into geology, however.  After two years of civil engineering at university, I wanted to change courses and geology was the most appealing option by some distance.

What are the main responsibilities of your job?

I was lucky in my introduction to the job and I had help learning the commercial side of things.  Stan Wood, the owner, had a very hands-off approach, leaving all the paperwork and running of the business to the manager.  I had to learn basic book-keeping, stock control, VAT returns, how to deal with wages, PAYE and HMRC, and stock purchasing.  This last one was key – buy the right stuff at the right prices and the business has a chance of survival.  It’s a global, albeit very small, industry, and Mr Wood’s Fossils has done very well to survive since its launch in 1987.  Customers remember the shop and return.  Word-of-mouth helped build a foundation and over time business has gradually become somewhat more predictable.  I bought the business from Stan in 2006 and have continued to work Monday to Friday since.

What is the best thing about your job?

It’s simply a nice place to work.  It’s not a supermarket where people see shopping as a necessity.  Nobody really needs to buy a dinosaur tooth or a meteorite, so when they come in, it’s generally because they want to.  I like it when customers ask questions.  The fossils and minerals are collected from all around the world, in many different ways, and I know the story behind a lot of them. I also enjoy the trade fairs I attend to find stock.  Twice a year I go to shows in Arizona and France, where people come from all over to buy and sell.  I have a big group of international friends I see once or twice a year and the shows are very much social occasions as well as vital for the business.

… and, what is the most challenging part of your job?

As I said, buying is very important.  The first time I went to Arizona to spend thousands of pounds of someone else’s money on stock (which would be crucial to the shop’s success in the coming year) was very daunting.  It gradually became easier as I began to get a better grasp on fair pricing, became better at assessing quality, and identified important and first stage suppliers.  After 18 years, attending the shows has become almost routine, although the first few days of a show, when I need to get the best of the big sellers before they are sold out, are still stressful.  Other than that, I’m not a big fan of paperwork, so from time to time that can be frustrating.

Shops in general face a huge challenge now, with out-of-town retail parks and online buying leaving many high streets struggling to fill premises.  Mr Wood’s Fossils is in central Edinburgh, which sees a lot of footfall from tourism and locals working nearby, so I feel we are cushioned slightly against what is a national and international trend.  The traditional high street is on its last legs and I would not recommend that anyone open a shop now, unless they have already built a customer base first, through a market stall or online.

What skills does it take to be successful in your job?

An eye for quality and a good sense of market value.  You have to know if something will sell at a sufficiently high price to justify purchasing decisions.  You can’t be too expensive but you need to have enough of a margin to keep the business going.

What are the most interesting fossils that you have sold in recent years?

Last year I had an enormous Titanites ammonite from Portland in Dorset that I had intended to buy for myself and take home.  I rarely bring the car into town so the ammonite had been sitting by the door of the shop for a few months, waiting.  While I was away on a buying trip a customer was determined to purchase it.  My assistant called me in France and we agreed to sell it.  I haven’t found another like it yet.

Does your work involve collaborations and/or business with institutions, such as universities and museums?

I have provided fossils for universities to use in their exams once or twice – they need to have a large number of very similar fossils, with clear characteristics to allow identification and so on.  I deal with museums fairly frequently.  Sometimes I provide a particular fossil or mineral for an exhibition, more often handling materials for education departments or events.  I’ve been out collecting with the National Museums of Scotland a few times over the last year, and I hope to do more of that.