Product: 047 The skeletal morphology, systematics, and evolutionary history of holothurians. 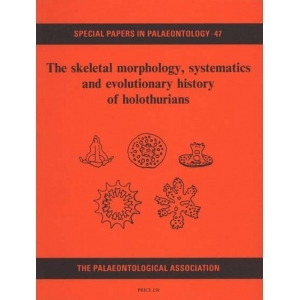 Special papers in Palaeontology: 47
<br />1993
<br />
<br />The skeletal morphology, systematics, and evolutionary history of holothurians.
<br />P M Gilliland
<br />
<br />147 pp., 11 pls, 18 text-figs.
<br />
<br />ABSTRACT. The skeleton of holothurians comprises a calcareous circum-oesophageal ring and calcareous sclerites of various shapes (termed morphotypes), both important in the classification of extant taxa. The fossil record of the Holothuroidea mainly consists of isolated sclerites which have been classified within an artificial parataxonomy; nearly 550 &#039;sclerite species&#039; have been described to date (compared with over 1400 extant species). It is argued that a proper understanding of holothurian evolution requires a more palaeobiological perspective of fossil material, initially based on knowledge of the Recent fauna.
<br />Brief in situ and biometrical observations of Recent sclerites are presented. The potential number of sclerites from an individual or population is substantial. The quantitative study of morphotype variation may be useful in classifying fossil taxa but is considered impractical for the recognition of assemblages of different morphotypes. The morphology and systematics of sclerites (and calcareous ring elements) in extant&#039; holothurians is reviewed and their taxonomic significance discussed. Over 50 morphotypes are identified and their co-occurrence in assemblages summarized. The problems posed by holothurian-type sclerites found in other groups are assessed. Sclerites are of limited significance in establishing higher taxa relationships.
<br />The fossil record of holothurians is reviewed with reference to the taxonomic framework of Recent forms. Body fossils (representing &lt; 3 % of fossil species), calcareous ring elements and sclerites are all considered. Nearly 100 fossil species are rejected, including many rod and plate taxa. Several fossil groups cannot be readily assigned to extant higher taxa, including Punctatites-type rods, Priscopedatidae and Palaeochiridotidae. The history of each order is discussed as well the class as a whole.
<br />Morphological (sclerite) innovation appears to accompany higher-level taxonomic (family) diversification. The earliest unequivocal holothurian is from the late Silurian and resembles a dendrochirotacean, whilst the Apodida, Elasipoda, and Arthrochirotida all appear in the Devonian. Morphological and taxonomic diversity increased considerably in the late Permian and Triassic, accompanied by little extinction, and included the probable earliest Aspidochirotida and Molpadiida. In the Jurassic the holothurian fauna developed a more &#039;modem&#039; character and several groups became predominantly deep-water. Little major change occurred during the Cretaceous and Tertiary. The Apodida are relatively better represented than the other orders, but the fossil record is evidently biased with uneven sampling through the stratigraphical column and possible effects of habitat preference, depth distribution, and sclerite size and ease of recognition. The taxonomic practice and procedures for naming fossil taxa are discussed. Phylogenetic interpretation based on the holothurian fossil record is limited; the most important evidence sclerites offer is a means of estimating divergence times between sister taxa. It is concluded that an historical perspective of holothurians is only possible through a proper understanding of fossil sclerites.