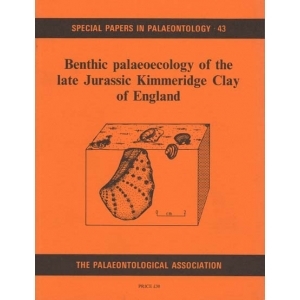 Special papers in Palaeontology: 43
<br />1990
<br />
<br />Benthic palaeoecology of the Late Jurassic Kimmeridge Clay.
<br />P B Wignall
<br />74 pp.
<br />
<br />ABSTRACT. Analysis of the fossil content of 700 samples from the Kimmeridge Clay, from both outcrops and boreholes, have led to the identification of nearly 55,000 specimens of benthos. These data have been combined with detailed sedimentological logging and a gamma ray spectrometry survey of the type locality at Kimmeridge Bay to provide a detailed depositional history.
<br />The Kimmeridge Clay is readily divisible into three distinctive sequences. The lower sequence is developed as a widespread mudstone facies containing diverse benthic associations dominated, for the most part, by infaunal bivalves; only in the basal condensed beds are epifaunal forms common. The high diversity and relatively low values of organic carbon and authigenic uranium indicate normal benthic oxygen levels. The central sequence of the Kimmeridge Clay is marked by rhythmic alternations of organic-rich shales and mudstones. A marked decrease in diversity and a change of faunal composition to opportunistic forms indicates a drastic reduction of benthic oxygen levels coincident with the facies change. The principal controls on faunal distribution, other than low oxygen levels, were the substrate and the dispersal rate of the organisms. The last factor was of primary importance in an environment subject to wide fluctuations of benthic conditions; brief oxygenation events could only be exploited by the most rapidly colonizing organisms. Contrary to reports from other black shale formations, stunting of the benthic fauna was not observed in the dysaerobic biofacies. Indeed, some exceptionally large individuals from such facies appear to have grown rapidly as a physiological response to low oxygen. The upper sequence of the Kimmeridge Clay is marked by a return to normally oxygenated conditions similar to those of the lowest sequence although epifaunal forms are more important, probably reflecting a firmer substrate at this level.
<br />Lateral facies changes are relatively minor in the lower part of the Kimmeridge Clay but towards the middle part of the formation (in the autissiodorensis Zone) facies variability becomes more distinct. Around the fringes of the London Platform a series of sandy formations are developed containing similar benthic associations to those found in the underlying Corallian beds.