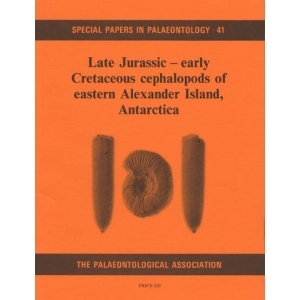 Special papers in Palaeontology: 41
<br />1989
<br />
<br />Late Jurassic - Early Cretaceous cephalopods of eastern Alexander Island, Antarctica.
<br />P J Howlett
<br />
<br />72 pp., 10 pls.
<br />
<br />ABSTRACT. The Fossil Bluff Group of eastern Alexander Island was deposited in the fore-arc basin of an active magmatic arc, which formed the present-day Antarctic Peninsula. Cephalopods are common throughout the group. Ammonites and belemnites of several localities within the northern half of the outcrop are described, and previously described cephalopods are revised. Nine genera and seventeen species of ammonites (of which Raimondiceras alexandrensis and Blanfordiceras weaveri are new), and two genera and sixteen species of belemnites (including two new subgenera: Belemnopsis (Parabelemnopsis) and B. (Telobelemnopsis), and four new species: B. (Belemnopsis) launceloti, B. (T.) rymilli, B. (T.) bertrami and B. (T.) stephensoni) are described. This detailed study of the cephalopods indicates that the Fossil Bluff Group ranges in age from Kimmeridgian (late Jurassic) to at least Aptian (early Cretaceous), and enables seven ammonite biozones and three belemnite biozones (including two sub-biozones) to be erected within the group. By comparing this new biozonation with other Southern Hemisphere schemes, the positions of the stage boundaries within the succession can be recognized.