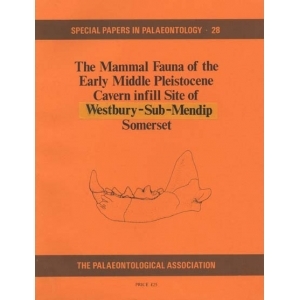 Special Papers in Palaeontology: 28
<br />1982
<br />
<br />The mammal faunas of the Early Middle Pleistocene cavern infill site of Westbury-sub-Mendip, Somerset. M.J. Bishop
<br />
<br />108 pp., 6pls.
<br />
<br />ABSTRACT. The mammalian remains from the cavern infill site near Westbury-sub-Mendip, Somerset, comprising forty-eight species, are described in detail for the first time. Three faunas can be recognized on stratigraphic and palaeoecological grounds. The first, Westbury 1, is a derived open woodland fauna recovered from the basal waterlaid sands and gravels, and may be a mixed assemblage, the faunal elements indicating any age between the Lower Pleistocene and the Cromerian. The second, Westbury 2, is a carnivore lair assemblage dominated by Ursus deningeri, recovered from a well-stratified series of cave sediments. The third, Westbury 3, is a small mammal fauna derived from an owl pellet accumulation, belonging to the same but slightly later part of the Westbury 2 temperate stage. The faunas of Westbury 2 and 3 probably belong to a temperate stage between the Cromerian and the Hoxnian, hitherto unrecognized in the British Pleistocene sequence. The Westbury stage almost certainly precedes the Anglian Glaciation, may represent a protracted temperate period following the end of the Cromerian Interglacial, and is tentatively correlated with palaeotemperature stage 13 of deep-sea cores. In Britain the only correlations that can be made are with Ostend, Norfolk, and possibly with the basal fauna of Kent&#039;s Cavern, but on the Continent correlations with a number of important sites are made, in particular Mosbach and Hundsheim.
<br />Westbury has yielded the richest carnivore assemblage and small mammal assemblage of any Pleistocene site in the British Isles, of which eight species described are new to the British Pleistocene.
<br />The Westbury 2 fauna is associated with finds of flints which may be artefacts, and as such would mark the earliest record of man&#039;s presence in Britain.