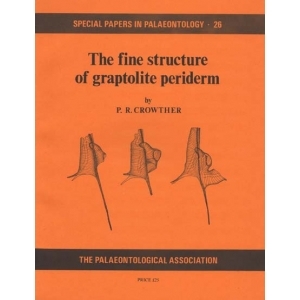 Special Papers in Palaeontology: 26
<br />1981
<br />
<br />The fine structure of graptolite periderm.
<br />P R Crowther
<br />
<br />119 pp., 20 pls.
<br />
<br />ABSTRACT. Graptolite fine structure is related to an over-all scheme of peridermal secretion; implications for graptolite phylogeny, mode of life, and zoological affinities are considered. Four dendroid and thirty-seven graptoloid species have been investigated by electron and light microscopy. The material was isolated either chemically or mechanically from the host rock and is in general very well preserved. The now-brittle periderm was flexible during life but survival of original ultrastructure is independent of the relative degree of diagenetic flattening. Syngenetic pyrite preserves ultrastructural details and does not distort the rhabdosome during its precipitation.
<br />The structure of fusellar and cortical tissue, retiolitid lists, nemata, stolons, and peridermal fibrils is reviewed and refined. Fusellar fabric, nemata, and stolons are illustrated by SEM micrographs for the first time. The nema possesses a well-defined axial canal which is thought to have been filled with soft tissue during life. Tubular stolons are constructed from crassal fabric and a newly defined macular fabric. Three distinct types of retiolitid list ornament suggest that ultrastructure may be of use in phylogenetic studies.
<br />Cortical bandaging is shown to be widespread amongst most graptoloids and remarkably uniform in pattern and detailed structure. Dendroids and primitive graptoloids may be similarly bandaged. Cortical bandages cover the surfaces of all but the very earliest growth stages. A close relationship between bandage width, fusellar height, and thecal size links deposition of both fusellar and cortical increments directly with zooid size. Some minor interspecific variation in bandage form and arrangement occurs. Both ectocortical and endocortical bandages have been found. Granular sheet fabric delimits most cortical bandages, sometimes with subrounded vesicles scattered over its surface. Some cortical-like fibrils within the body of a fusellus bear a characteristic periodic structure consistent with a collagenous composition. Amino-acid analyses of well-preserved material reconfirms that no amino acids have survived.
<br />The microstructure of secondary periderm is similar in graptolites and some extant hemichordates. Inclusion of foreign debris in the cortex of a dendroid is described. The general structure of graptolite and hemichordate periderm indicates that a similar secretory scheme was used for both. Cortical bandages are consistent with the use of a cephalic shield-like organ. Graptolite cortical tissue is compared and contrasted with collagenous ectodermal tissues of several extant solitary organisms. The fine structure of graptolite periderm is inconsistent with the presence of a continuous covering of soft secretory tissue. The vindication of an essentially pterobranch-like secretory scheme reaffirms the position of the Graptolithina as a Class within the Phylum Hemichordata.