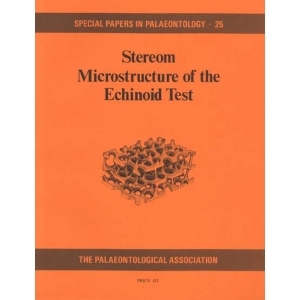 Special Papers in Palaeontology: 25
<br />1980
<br />
<br />Stereom microstructures of the echinoid test.
<br />A B Smith
<br />
<br />81 pp., 23 pls.
<br />
<br />ABSTRACT. The stereom of coronal plates from a large number of Recent echinoids has been analysed to provide data for interpreting fossil echinoderm stereom. Both the external surfaces and cross-sections of individual plates have been examined by scanning electron microscopy and six basic three-dimensional lattices are identified and described, plus a further three types of stereom layer. Although all coronal plates examined have the same basic plate construction, details of the stereom composition and relative development of the dilTerent layers vary. From the distribution of the dilTerent stereom lattices within the plates, the stereom microstructure of the echinoid test is related to phylogeny, growth rate, and soft tissue type. Some stereom arrays are restricted to particular orders reflecting phylogenetic differences. Stereom growth banding in all layers is shown to correspond with &#039;pigment&#039; banding. The stereoms which alternate to produce the banding are not the same in different plate layers. In most cases, rapid growth is associated with more open stereom and a reduced growth rate produces a denser stereom. In the middle plate layer, periods of minimal plate growth are distinguished by the disruption of the galleried stereom. It is probable that major stereom banding is the product of annual growth cessation which occurs during gonadal development. Certain stereoms are always found in association with a particular tissue, and there is a correlation between the way in which fibres attach to the test and the construction of the stereom of the attachment area. Environmental factors, such as the temperature and the availability of CaCO3, may also influence the stereom construction. Some stereoms are mechanically designed for stress bearing. The growth strategy adopted by a species is reflected in the plate construction and it is therefore possible to identify the difference in emphasis placed on growth, reproduction, and maintenance.
<br />Surface stereom is quantitatively analysed in thirty-two species according to the nature of the overlying tissue. Stereom variation is pronounced both within different areas of one plate and within the same area in different species. The stereom array at the plate surface is dependent largely on the plate design which is, in turn, influenced by the growth rate, the associated soft tissue, and by resorption. There is rarely a simple correlation of one stereom to one tissue and a particular fabric may be associated with a number of different tissues. By using a combination of surface quantitative and qualitative data and cross-sectional construction, it is possible to differentiate areas of sutural collagen fibres, catch apparatus fibres, muscle fibres, and epithelial tissue in nearly all species examined. Stereom interpretation can be successful only with a sound knowledge of the plate construction and growth.
<br />The ecological significance of the superficial stereom construction is considered and rejected. Resorptional features of the plate are described. Areas where tubercles have been resorbed have a distinctive stereom and the filler stereom laid down behind ambulacral pores, as they move marginally by resorption, is different from normal plate stereom. Lateral movement of tubercles is clearly evident from growth banding in cross-section. The similarities and differences between echinoid stereom and crinoid and ophiuroid stereom are discussed, emphasizing the care which must be taken in interpreting stereom fabrics in fossil echinoderms. There is a wealth of biological information encoded in the stereom microstructure.