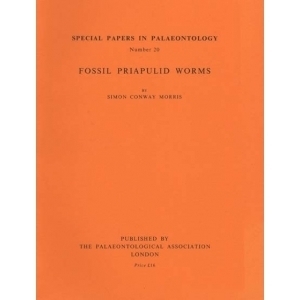 Specials Papers in Paleontology: 20
<br />1977
<br />
<br />Fossil priapulid worms.
<br />S Conway Morris
<br />
<br />103 pp., 10pls.
<br />
<br />ABSTRACT. The morphological details of some fossil worms from the Middle Cambrian Burgess Shale of southern British Columbia are described with the aid of reconstructions and plates with accompanying explanatory camera-Iucida drawings. The species described are: Ottoia prolifica Walcott, Selkirkia columbia sp. nov., Louisella pedunculata Walcott, Ancalagon minor (Walcott) gen. nov., Fieldia lanceolata Walcott, Scolecofurca rara gen. et sp. nov., and Lecythioscopa simplex (Walcott) gen. novo The preservation of these fossils is unusually fine. External details include a number of cuticular specializations on the probosces such as spines, teeth, hooks, and papillae. Most of the worms have trunk spines or hooks, whilst L. pedunculata is also characterized by two rows of trunk papillae. Features of internal anatomy that have been recognized in O. prolifica include the gut, retractor muscles, and a nerve cord. Internal organs of the other worms are generally less well defined. O. prolifica fed on hyolithids, occasional brachiopods, and even members of its own species. S. columbia, L. pedunculata, and A. minor were also apparently predators, whereas F. lanceolata was probably a deposit feeder. The feeding habits of S. rara and L. simplex are uncertain. All the worms are burrowers: O. prolifica and L. pedunculata in particular show marked adaptations for this way of life. The inftuence of decay and rotting prior to fossilization of the specimens is recognized and discussed.
<br />With the possible exception of S. rara and L. simplex, these Burgess Shale worms can be accommodated within the Priapulida, which today forms a small phylum of marine infaunal worms. This taxonomic assignment is determined by the structural homology that exists between the armed probosces of these worms and modem priapulids. The Pennsylvanian priapulid Priapulites konecniorum Schram from the Mazon Creek area ofIlIinois is also redescribed. Information on Cambrian and Pennsylvanian priapulids permits a tentative phylogeny to be proposed. It is evident that the Priapulida was a far more diverse group in the past than it is at present. The possible affinity of the priapulids with the endoparasitic phylum of Acanthocephala is re-examined in the light of the similarity between the Burgess Shale priapulids, especially A. minor, and a hypothetical proto-acanthocephala.
<br />Nomenclatural changes amongst the Burgess Shale priapulids include the establishment of two new genera (Ancalagon, Lecythioscopa) and one new species (Selkirkia columbia) for worms previously described by Walcott. Several cases of synonymy are noted. They include Miskoia preciosa Walcott and M. placida Walcott which are junior synonyms of L. pedunculata and O. prolifica respectively.
<br />A number of other fossils that have been placed in Ottoia and Selkirkia by Walcott and other authors are reappraised. One specimen from the Cambrian Kinzer Shale formerly placed in Ottoia appears to belong within the Palaeoscolecidae (Annelida~ which is represented by Protoscolex and Palaeoscolex. Aspects of this family, which ranges from the Cambrian to the Silurian, are reviewed.