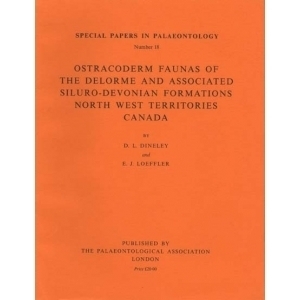 Specials Papers in Paleontology: 18
<br />1976
<br />
<br />Ostracoderm faunas of the Delorme and associated Siluro-Devonian Formations, Northwest Territories, Canada.
<br />D L Dineley &amp; E J Loeffler
<br />
<br />159 pp., 30 pls.
<br />
<br />ABSTRACT. Vertebrates from several horizons within the Delorme Formation and associated Siluro-Devonian strata in Canada&#039;s District of Mackenzie (N.W.T.) include members of the ostracoderm families Traquairaspididae, Corvaspididae, Cyathaspididae, Pteraspididae, and Cephalaspididae, and of the order Thelodontida.
<br />The Traquairaspididae is represented by eight new species displaying unusual variation in ventral ornamentation and including forms in which the dorsal shield comprises a single plate: all are referred to ?Traquairaspis. The biostratigraphic range of the family appears to be Middle Silurian to Dittonian.
<br />Eighteen species of the Cyathaspididae include single species of the new genera Asketaspis and Nahanniaspis and one new species of Vernonaspis, Tolypelepis, and Pionaspis. The rest of the material is accommodated by use of open nomenclature. Articulated specimens of Nahanniaspis mackenziei gen. et sp. novo and DinJJspidella sp. indet. are used to elucidate relationships with the family. Dikenaspis is relegated to the Cyathaspidinae. The Irregulareaspidinae and Cyathaspidinae are thought to have evolved anastomosing lateral line systems independently. Superficial concentric zones on the shields of several species are interpreted as growth marks and show different patterns of growth in three subfamilies; they confirm the epitega as independent units of growth. It is also shown that the superficial layer was capable of limited regeneration.
<br />The family Pteraspididae is revised, being represented here by at least three new species which are included in the new genus Canadapteraspis, together with an established species previously referred to Althaspis. This family is thought to be more closely related to the Traquairaspididae than to the Cyathaspididae.
<br />Aserotaspis canadensis gen. et sp. novo and Natlaspis planicosta gen. et sp. novo are distinctive, but their affinities remain obscure. The former may be close to Tesseraspis, but the latter may be akin to some of the traquairaspids.
<br />Of the several species of Osteostraci described, only one is new; the rest are accommodated by open nomenclature. The new species of Cephalaspis is a bizarre form with a harbed dorsal spine.
<br />Articulated thelodonts are referred 10 a new species of Sigurdia Heintz. Pending detailed histological investigation, the many isolated denticles are referred to Types 1-5.
<br />Lepidaspis serrata gen. et sp. nov., a form with armour of scale-like units, is tentatively referred to the Agnatha.
<br />These faunas are of use in a revision of the age of Silurian and Devonian ostracoderm occurrences in Europe and North America and in a discussion of ostracoderm provinciality. &#039;North American&#039; and &#039;European&#039; areas were characterized in the Silurian by more common Heterostraci and Osteostraci, respectively. Continental collision and the spread of Old Red Sandstone facies facilitated the fusion of the two provinces.