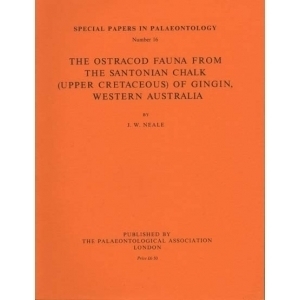 Specials Papers in Paleontology: 16
<br />1975
<br />
<br />The ostracod fauna of the Santonian Chalk (Upper Cretaceous) of Gingin, Western Australia.
<br />J W Neale
<br />
<br />131 pp., 22 pls.
<br />
<br />ABSTRACT. The Santonian Chalk at One Tree Hill, Gingin, Western Australia yields an ostracod fauna of forty-nine species. Of these, thirty species and one subspecies are new, two were established by Chapman (1917), nine by Bate (1972), one by Neale (1974), and six are left under open nomenclature. The twenty species and varieties of Chapman&#039;s original work are reassessed and are considered to belong to seventeen species, one of which is left under open nomenclature and none of which can be assigned to European taxa.
<br />The new families Collisarborisidae and Pennyellidae were confined to the South Africa-Australia-Western Pacific area during the Upper Cretaceous. After this the Collisarborisidae appear to have died out, but the Pennyellidae continued through the Tertiary to Recent times becoming cosmopolitan and deep water from the Oligocene onwards.
<br />Six new genera-Collisarboris, Crelaceralina, Ginginella, Hemingwayella, Rayneria, and Verseya-are described, and the fauna shows a high degree of endemism. It is suggested that the combination of cosmopolitanism and endemism seen in the fauna is a reflection of the ocean currents prevailing at that time. Orthographic projection equatorial and polar maps showing tentative reconstructions of the land areas and oceanic circulation in Upper Cretaceous times are given.
<br />All the indications point to the environment being a warm, euhaline, shallow sea at this time, the depth being of the order of 100 m and the minimum temperature about 10 °c.