Product: 009 Fish from the fresh water Lower Cretaceous of Victoria, Australia with comments on the palaeoenvironment. 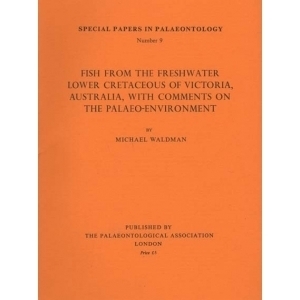 Special Papers in Palaeontology: 9 Fish from the fresh water Lower Cretaceous of Victoria, Australia with comments on the palaeoenvironment.

The Ceratodontidae are known from a single specimen, referable to Ceralodus sp. The Coccolepididae are sparsely represented by Coccolepis woodwardi sp. novo Only one species of archaeomaenid is known from the site, Wadeichlhys oxyops gen. et sp. novo This is the most primitive archaeomaenid known, possessing enamelled scales overall, an unossified notochord, an uncompacted caudal skeleton, and preopercular pit-lines and sensory canals similar to those of some parasemionotids.

Koonwarria manifrons gen. et sp. nov., type genus of the new family Koonwarriidae, appears to be derived from the archaeomaenids and is considered to be a teleost. The caudal skeleton is compact and homo-heterocercal, with elongate uroneurals and well-formed hypurals. The scales are cycloid and skull pit-lines are greatly reduced.

A new species of Leplolepis, L. koonwarri, is closely related to L. lalbragarensis from the Jurassic of New South Wales. It may also have affinities with the Cretaceous L. diasii from Brazil and Clupavus brodiei from the English Upper Jurassic. L. koonwarri is a mosaic form with 'advanced' skull features such as the loss of the postorbital and possession of few preopercular canal branches, but the axial and caudal skeleton is of primitive leptolepid form.

The palaeo-environment was lacustrine or paludal, and mass mortality occurred periodically due to anoxic winter conditions beneath an ice-cover; the phenomenon known as 'winterkill'. The graded laminations present in the fish-bed are thought to be seasonal and to represent successive spring tloodings, with settling of sediment during the years of the fish-bed. They may therefore be described as varves. Although such laminae are most common in deep, cold lakes, the widespread aquatic arthropod fauna is characteristic of a modem shallow-water environment. The number and variety of terrestrial insects and the small size of the fish also indicate shallow waters.